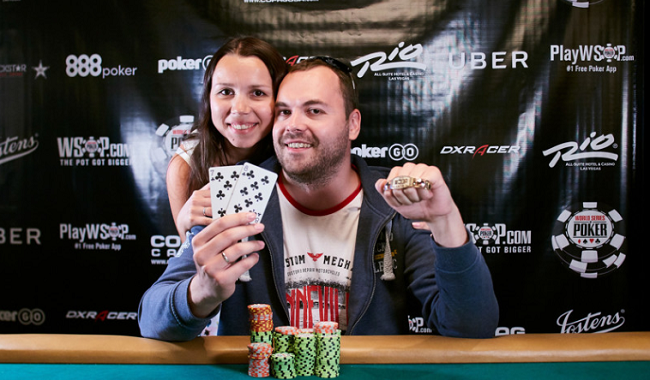 
Just about seven WSOP gold bracelets are left to be given out in the 2018 World Series of Poker, with the latest one being awarded in the Event #73: $1,000 Double Stack Turbo. The tournament saw a field of 1,221 entries and was shipped by Russian poker player, Denis Timofeev.

Timofeev cashed out twice in last year’s World Series and this turned out to be his second cash of WSOP 2018 as well. However, it was also his maiden WSOP bracelet. The top 184 players of this field were paid out a minimum cash prize of $1,496 and Timofeev took home the biggest cash from the prize pool that was slightly over a million dollars.

He won $199,586 for first place, making it his biggest live cash and taking his live poker earnings close to the $800k mark. Heads-up with Spanish female poker pro Leo Margets saw a series of all-ins which exchanged the chip lead quite a few times. The swingy heads-up battle ended when Timofeev rivered a flush and took down the pot which contained all the chips on the board.

“I don’t understand what’s happened! I like to play Turbos and Hypers online, and it’s good in live tournaments too because you don’t need to play for a lot of days to win the big money. I just played my game, sometimes I was very lucky. This WSOP has been no good for me. This is only my second ITM. My first was for $600 in The GIANT, so this is a nice comeback to finish off the Series,” said Timofeev about the win and his series so far.

The 2018 WSOP Main Event is also down to the final table and you can get all updates from that prestigious tournament on GutshotMagazine.com, so stay tuned.