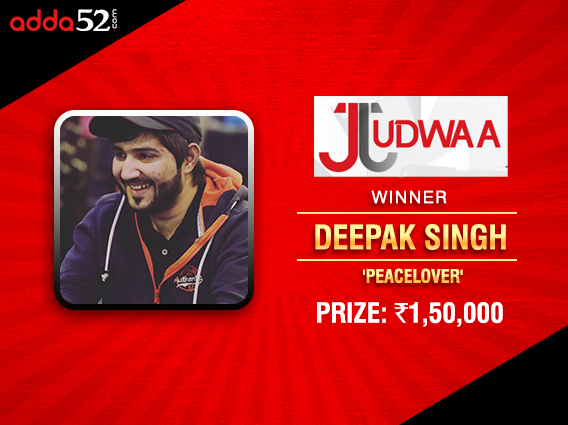 
The word ‘Judwaa’ means twins so it only makes sense that this poker tournament is played not once, but twice every week. Adda52 is one of India’s top poker companies and they host the Judwaa tournament every Tuesday and Wednesday night, with the same time, the same buy-in and the same guarantee.

Last night was the first Judwaa INR 5 lakh GTD tournament of the week and it kicked off at 8pm on Adda52. With an INR 2,750 buy-in, the tournament saw a total of 160 entries (102 players + 58 re-entries) registering to the tournament and fighting it out for the top prize.

However, just one of these entries emerges victorious. Last night, that one player was Deepak Singh aka ‘Peacelover’ who has been playing on Adda52 since quite a while now. In a long grind that lasted 5 hours and 33 minutes, Singh beat ‘balls86’ to take away the top prize of INR 1,50,000 for shipping the tournament.

A total of 12 players finished in the money with a minimum cash of INR 8,750 and these included quite a few known players. In third place was Bhola Sharma aka ‘bhola’ who just recently completed a big victory on Adda52, winning the Whale 6-Max tournament over the weekend.

Also finishing in 8th place was Mihir Thakkar aka ‘gameofdeath’ who has been featuring on several final tables on Adda52 in recent times. He finished as runner-up in The Roar just last week and then immediately followed that up with another deep run, finishing third in last week’s Judwaa tournament.

Gutshot contacted Deepak Singh for a quote after he took down this tournament. The player didn’t want to comment on the same, saying he hopes to comment on a much bigger win in time to come, so we expect to hear more from this player. Keep reading GutshotMagazine.com for more updates on the top Indian poker tournaments.