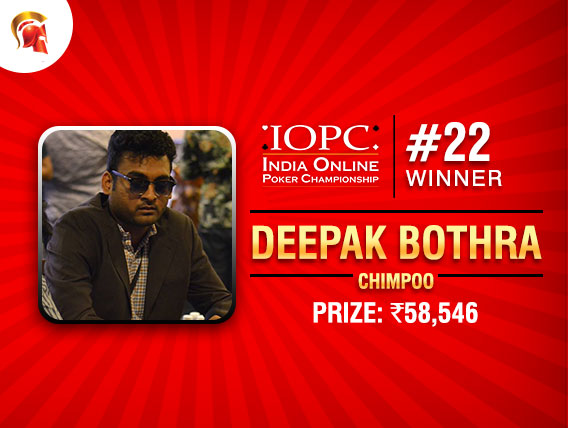 
‘Eat, Sleep, Grind, Repeat’ seems to be the mantra for Indian poker pro Deepak Bothra aka ‘chimpoo’ as he has won yet another online title on The Spartan Poker, and has accumulated vital points towards the IOPC Leaderboard, where INR 30+ lakhs are up for grabs, including a brand new Jeep Compass.

Just a couple of days back, Bothra shipped Event #19 of the ongoing Indian Online Poker Championship and when Gutshot spoke to him, he said, “I am fighting for a top finish on the IOPC leaderboard.” Indeed, he is working towards that top spot on the leaderboard, climbing to #2 and only behind Nikhil Ramesh now.

The healthy participation meant the guarantee was nearly doubled and a new prize pool of INR 2,92,000 was created. This allowed the top 39 players to be paid out a minimum cash prize of INR 2,015 and Bothra took home the biggest prize of all. He continued his online dominance, after having won several titles on Spartan in the last year.

The tournament ended in Level #45, where the blinds were running 24,000/48,000 – 6,000. He created a chip lead of nearly 3:1 against Pokerface63 before the final hand was played. With Q-A in hand, Pokerface63 went all-in pre-flop and Bothra called with K-Q. The board then opened J-K-9-7-9 and Bothra took down the pot, with his two pairs (Kings and Nines) beating his opponent’s pair of Nines.

When contacted after this win, Bothra said, “I need to keep winning these to keep up the fight, but a win is a win.” Keep reading GutshotMagazine.com for daily updates on the ongoing India Online Poker Championship.