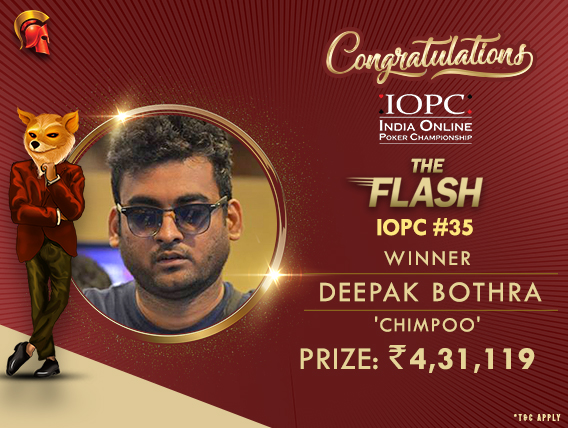 
The second biggest event in India Online Poker Championship (IOPC) Day 7 was the feature tournament of Thursday on The Spartan Poker – The Flash. Ordinarily, the Flash has INR 5 lakhs GTD but since it was part of IOPC, the tournament had a major boost in its guarantee. The biggest of the day though, was the SHR which was shipped by Gokul Raj for over INR 28.1 Lakhs.

The winner to emerge from almost 6 hours of non-stop poker action was acclaimed online/live player Deepak Bothra aka ‘chimpoo‘, who took home a cool pay-check of INR 4,31,119. He beat another well-known grinder Siddarth Singhvi aka ‘PeterPunter’ in heads-up action to take secure his title and the 1st place cash prize.

The final hand of the tournament had Bothra ahead in chip counts with a little over 2:1 chip lead. Singhvi shoved pre-flop with As 4d and received a call by Bothra who was packing pocket Sevens. The board gave Singhvi a pair of Fours but the set of Sevens made by Bothra beat Singhvi’s hand and he had to settle for the runner-up cash prize of INR 2,73,846.

Bothra has played many online tournaments and accumulated lots of cashes in his career, but he has has tremendous success in Spartan’s IOPC previously, having made 3 title wins already. First, he won the PLO SHR in January 2018’s IOPC for over almost INR 10 Lakhs. The next IOPC in June saw him take two titles in two days, an INR 3 Lakhs GTD and an INR 1.5 Lakhs GTD. He even shipped two Destiny tournaments on Spartan in 2017 and 2018, and these are his wins just on Spartan, among others. He likes to play live too and has two titles to his name from 2017. He won the DPT Tag Team for INR 2,37,000 and later the 2017 WPT India PLO event for INR 4,88,000.

We got in touch with Bothra after his win and he was elated to speak to us and said, “It was a sweet win for me after I finished 2nd in The Flash last week. I wanted to desperately close the tournament this time. The heads-up against Siddarth Singhvi was fun too.” The player will be looking to play some more IOPC and will be hoping to ship a few with this welcome bankroll addition.

Out of the top 47 paid places, Sumit Sapra aka ‘mrgr33n’ cashed at 7th for INR 73,438. Previous IOPC Leaderboard winner and runner-up in yesterday’s SHR Pulkit Goyal finished 9th for INR 44,240.

Keep reading GutshotMagazine.com as we bring you fresh updates from the ongoing IOPC as well as for your daily dose of poker news from around the world.