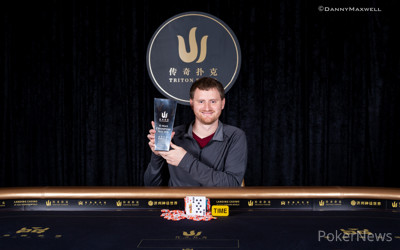 
The Triton Super High Roller Series made a stop at the beautiful island of Jeju in South Korea, where some of the best high-stakes players in the world were ready to hit the tables and make some big bucks. The series had only 4 scheduled tournaments and the HKD 500k 6-Max Event was one of them.

Yesterday in Jeju however, Peters finally shipped his first ever Triton SHR live poker title, beating 39 entries and shipping the 6-max event for HKD 8,775,000 ($1,118,484). “It was up and down quite a bit. Towards the bubble, I was getting a little short. The chip lead was getting back and forth when we were three-handed,” said Peters, who did well to win the title amongst top players from around the world.

3-handed play took place between Peters, Stephen Chidwick and Steve O’Dwyer. These guys are some of the best high-stakes players in the world and among the 3 of them, they have more than $65 million in live poker winnings. Peters himself has taken his career earnings past the $22 million mark.

Only 4 players were paid out in this tournament and then all eyes turned towards the $1 million Short Deck Ante-Only event. Keep reading GutshotMagazine.com for an update on that tournament as well.