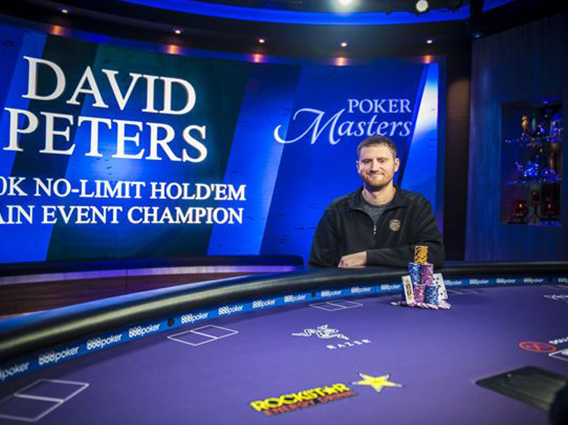 
It took about five hours of three-handed action before David Peters was able to be the last man standing at the 2018 Poker Masters $100,000 Main Event. Peters who was the chipleader on the first two days of the event went onto to seal the deal by winning the title and the $1,150,000 top prize.

Along the way, Peters outlasted stalwarts like Bryn Kenney, Koray Aldemir and then Dan Smith in heads up on his way to this victory. He now has over $4.5 million in tournament cashes in this year alone. This makes it his second win of this Poker Masters series having won the opening $10,000 event as well at the start of the schedule.

Despite his two titles, as we informed our readers earlier, it was another 2-title winner Ali Imsirovic who ended up claiming the Poker Masters Purple Jacket. The only other player in contention with Imsirovic was Brandon Adams who also had several deep runs and a title at the series. His elimination which happened at the final table of this Main Event but he did not make the money as only 4 places were paid out in this 25 players field. That out of the money elimination paved the way for Imsirovic’s Purple Jacket win for the most consistent performance.

Peters held a marginal lead over Smith going into the final day’s play with four-handed action. Kenney and Aldemir had a lot of ground to cover chip-wise and it seemed inevitable that Peters and Smith would end up doing headsup battle. Kenney battled on with his short stack but ultimately was the first of the four to go when his Q T fell short of Aldemir’s Q J. Aldemir, despite some heroics was unable to get past Dan Smith falling in 3rd place. Peters managed to gain the lead early on in their heads-up match winning a couple of big pots. In the final hand Peters managed to hit a 3-outer with his K 7 winning against Smith’s A 7.