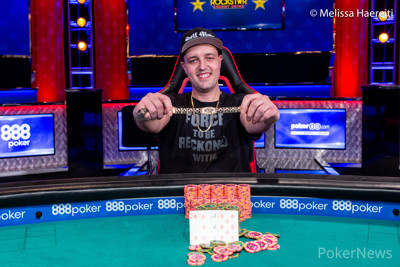 
Here’s a player who has won several live poker titles in his career as a poker player thus far. Baltimore’s David Brookshire has been a low-stakes player over the years, with many tournament wins, including a WPT title and a WSOP Circuit ring. His latest achievement, however, was the major one of winning a WSOP bracelet.

Event #46: $2,500 Mixed Omaha Hi-Lo 8 or Better/Seven Card Stud Hi-Lo 8 or Better attracted 402 entries which created a prize pool of nearly a million dollars and at the end of three days of tournament play, Brookshire was declared winner, taking home $214,291 for first place.

This turned out to be the largest live cash of Brookshire’s career, having overcome a massive 1:8 chip deficit to beat Brendan Taylor in heads-up. Brookshire was 106th out of 152 players that came out to play on Day 2 of the tournament and 9th out of the final 15 that came out on the final day.

He was excited to have won the event after being so much behind. He said, “It’s really emotional. It feels so good to win after Brendan had an 8:1 chip lead on me, and then coming back. Kind of felt like he had it in the bag and was praying real hard inside while I was playing. I felt really blessed to be able to make a comeback and pull out the win.”

“This is a great event. I love all the mixed-game events here, and now I’m going to have a bankroll to play them for the next few years. Hopefully, I’ll be able to run it up. There’s a lot of events I’ve missed because I can’t afford to play them, and that’s going to change right now,” he added, speaking about his plans now that he has considerably added to his poker bankroll.

Keep reading GutshotMagazine.com for more updates from the 2018 World Series of Poker.