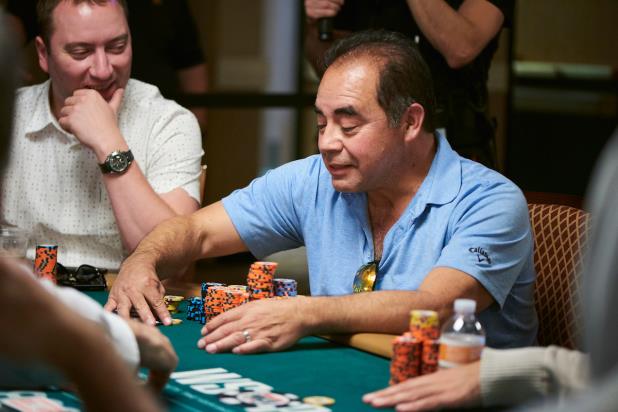 
Thursday’s Day 2AB in the 2018 World Series of Poker’s No-Limit Hold’em Main Event – World Championship has completed play for the day, with California’s Shawn Daniels bagging 533,500 in chips to lead the day’s 1,131 surviving players. That total was a bit less than half of the 2,460 players who started play on Day 2AB 12 hours earlier. Friday’s Day 2C found 3,480 players starting the day, each a survivor of Wednesday’s record-setting Day 1C starting flight, and when Friday’s ten hours of play concluded, amateur player Ignacio Sanchez topped the pro-laden chip counts.

32-year-old Daniels is just ahead of four other players who also finished the night with more than 500,000 in chips. McLean, VA’s Eric Liebeler bagged 532,000 for second, closely followed by Spain’s Samuel Bernabeu, with 524,000. Michael Dyer (502,400) and Casey McCarrel (501,800) rounded out the flight’s top five. Daniels surged to the lead very late in a day that saw several different players edge across the 500,000 chip plateau, only to slide back in the night’s last two levels. Daniels made a deep run in the Main Event just one year ago, when he finished 72nd and earned $101,444, roughly half of his $201,092 in lifetime WSOP earnings. The solid start has Daniels in great position to post another big score this time around.

Sanchez on the other hand ended his Day 2 with more chips than Daniels. A citrus farmer from within California’s Central Valley, Sanchez finished the night with 627,200 in chips to lead Day 2C’s 1,668 survivors and take the overall lead entering Saturday’s Day 3. He got the best of a deep-stacked table that for a while on Friday evening featured the two deepest-stacked players in the entire Day 2C battling each other. Cliff Josephy, poker’s “JohnnyBax”, battled with Sanchez for the overall lead before Sanchez took down a couple of big pots late to gain the overnight edge. Sanchez’s huge Day 2C put him more than 75,000 chips clear of the next-highest total posted on the day. That 551,600 total was bagged by France’s Eric Sfez. Sfez won a WSOP International Circuit Ring in Rotterdam, Holland, last August.

The largest Main Event in 12 years also offers a $74,015,600 prize pool, with $8.8 million being awarded to this event’s winner when action concludes on 14 July. 1,182 players will cash, with each locking in a minimum $15,000 payday when the money bubble bursts.  Saturday’s Day 3 combines all surviving players from the Main Event’s three separate starting flights for the first time and we will bring you that update tomorrow right here at GutshotMagazine.com.