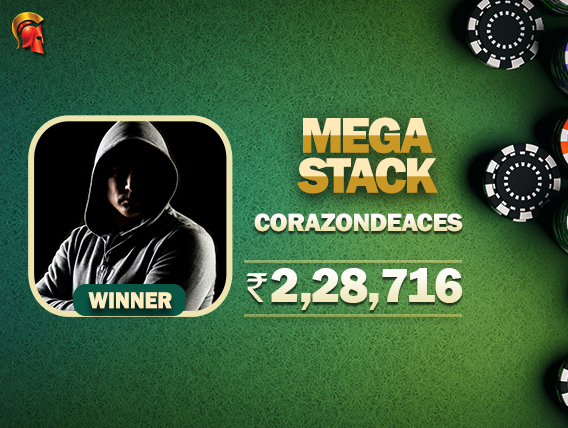 
As regular Indian poker players would already know, The Spartan Poker holds daily online featured tournaments with high guarantees, giving everyone the chance to be the next big winner. Yesterday, they hosted the Mega Stack tournament, one which is played every Tuesday night at 7:30pm.

Mega Stack INR 12 Lakh GTD kicked off last night with a buy-in of INR 3,300 and as usual, the guarantee was passed with a brilliant participation of 445 entries. This participation created a new prize pool of INR 13.35 lakh and this was eventually shared among the top 39 players, with a minimum cash prize of INR 9,212.

Winning a tournament on Spartan is never easy, so when you do, you can be very proud of yourself. Last night, it was ‘CorazonDeAces’ who would be one proud player, beating the field and shipping the tournament for the top prize of INR 2,28,716. He ousted many players along the way, except his heads-up opponent ‘thekid’, with the two striking a heads-up deal to end the tournament.

It eventually came to an end a few minutes before 2am this morning, when the blinds were running 32,500/65,000 – 6,500 in Level #58 of the tournament. CorazonDeAces held a decent chip lead but thekid was playing aggressively and they both eventually decided to cut a deal, with not much of a difference in their chip stacks.

CorazonDeAces was still ahead at this point, with thekid settling for the runner-up prize of INR 2,16,906. Gutshot tried to have a word with the winner after he shipped this featured tournament on Spartan last night, but he wished to stay anonymous. Tonight, is the INR 25 lakh GTD Destiny tournament on Spartan and you can get all updates on that tournament here on GutshotMagazine.com.