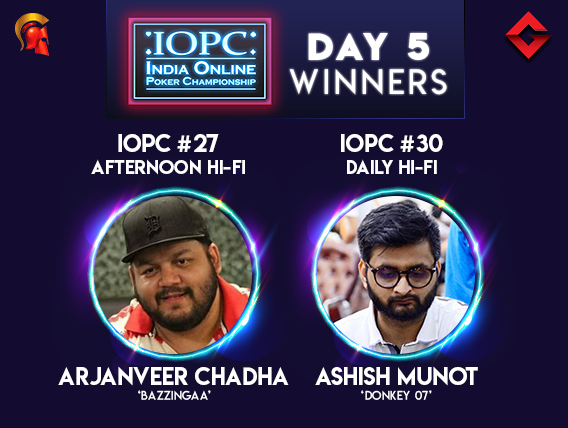 
Once again, it was a good day for the poker fanatics registering themselves in the India Online Poker Championship (IOPC) as all 5 tournament guarantees were crushed! Players earned quite well for their efforts and managed to take home bundles of cash prizes. The Tuesday feature Mega Stack came in with the biggest promised amount of INR 25 Lakhs followed by Ashish Munot triumphing the Daily Hi-Fi INR 15 Lakhs, putting an end to the day. And here is a complete summary of IOPC Day 5…

A great start to the first tournament of the day enrolling a total of 845 entries for a buy-in of INR 550 creating a bigger prize pool of INR 4.22 Lakhs. The top 55 places earned themselves a min-cash of INR 2,070. Finally, the field was conquered by IOPC Event #10 champ ‘Amaterastu’ who defeated ‘snapChat’ in heads-up to grab the IOPC title. It was in level 49 that ‘Amaterastu’ rivered trip Seven and remained undefeated after his opponent went all-in and flipped single pair of Sevens.

Once again, Arjanveer Chadha proved himself after already winning IOPC Event #9 on Day 2. Chadha outlasted a field of 556 runners, each one of whom paid INR 1,100. Generating a higher prize pool of INR 5.56 Lakhs from which the top 39 finishers took a share, earning a min-cash of INR 3,836. Chadha took away the largest portion from the same after railing out online reg Neeraj Kumar aka ‘SelfClaimedPros’ in level 41, heads-up play. Chadha tossed his pair of Jacks and Kumar unable to find a better pair was eliminated in the second position.

The next in line was INR 4.5 Lakhs. The smaller tournaments have been crossing the guarantee and the third event also followed the same format. Pulling a total of 624 players and creating a prize pool of INR 4.99 Lakhs, out of the top 47 places were paid min-cash INR 2,845. Capturing the winner’s prize money was ‘Prak27’ who railed out IOPC #14 winner Nehal Agarwal aka ‘PantherPaw’ in level 46 of the tournament by pairing Jack on the river and finally tossing over his two pairs of JJ99.

The Tuesday feature on Spartan Poker promised INR 25 Lakhs enrolling 1,141 players and further creating a prize pool of INR 34.23 Lakhs. Out of this massive field, only the top 111 finishers benefited, strolling out with a min-cash of INR 8,557. ‘Conclusion1100’ conquered the tournament and ended up topping the list after beating IOPC Elite winner Bheem Singh Meena aka ‘TymTravel’ in heads-up,

In level 54, ‘Conclusion1100’ having 4s 5s up against Singh with 6s Ad. Flop 6d 7d 7h saw both players putting their entire stack in the middle. ‘Conclusion1100’ hit a straight on turn 8c but with river Td, the tournament halted and ‘Conclusion1100’ remained undefeated as Singh showed his two pairs of Sevens and Sixes. To read more on the daily feature, click here.

Day 5 ended with the final tournament being Daily Hi-Fi. Event #30 attracted a total of 870 entries with each one paying a buy-in of INR 2,750. The guarantee was crushed once again creating a prize pool of INR 21.75 Lakhs and the top 72 finishers earned INR 7,612, min-cash for their efforts. It was the 2019 WPT Indian Main Event champ Ashish Munot playing under the username ‘Donkey 07’ who took away the IOPC title along with handsome prize money beating Samay Modi aka ‘Limitless’ in heads-up. To read more on Munot’s win, click here. For more updates on the India Online Poker Championship and other tournaments from around the world, stay tuned to GutshotMagazine.com.