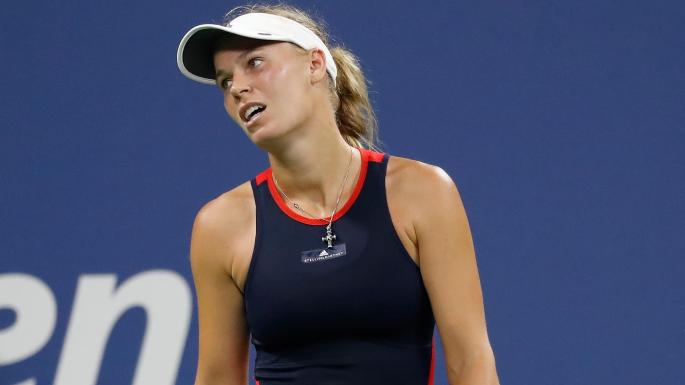 Caroline Wozniacki ousted from 2018 US Open


It’s becoming a trend now that the women’s competition in any major Grand Slam cracks wide open early on, giving the chance to see new champions. In the US Open Round 1 itself, we saw the top seeded Simona Halep crashing out, while Round 2 saw the women’s #2 seed Caroline Wozniacki being shown the exit door.

Once again, it’s a major slam and the lower seeded women’s players have a chance of progressing further than they initially expected. In this game, Wozniacki lost to the unseeded Lesia Tsurenko from Ukraine, who won 6-4, 6-2 and sent Wozniacki out of the 2018 US Open.

“I have a great nightlife experience matches with high level of humidity, thanks to performances in Acapulco, where I won two titles. I think that my victory in the match against Garbine Muguruza in Cincinnati and other victories there increased my confidence, so I can play. I came here before, I’m well prepared,” commented the 29-year old Tsurenko after this win.

While the women’s top seeds continue to fall, it’ll be a cause of alarm for Wozniacki, who has now had a long streak of bad form. Since she won her maiden Grand Slam title in January this year, she hasn’t been at her best, making early exits from the other three slams of 2018.

The other results throughout the day went as expected, with Roger Federer, Novak Djokovic and Alexander Zverev all three progressing to Round 3, while Angelique Kerber and Caroline Garcia were among the top women’s players to go through at the Flushing Meadows in New York.

It was a mixed day for the Indian contingent as well. Divij Sharan won his Round 1 Men’s Doubles game with his New Zealand partner, fresh off a gold medal at the 2018 Asian Games in Jakarta. Leander Paes, on the other hand, lost his Men’s Doubles game, while Rohan Bopanna lost his Mixed Doubles match.

Keep reading GutshotMagazine.com for daily updates on the 2018 US Open Championships.