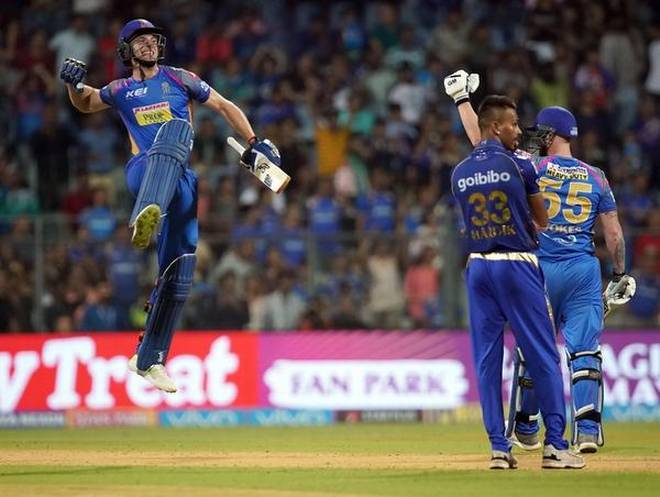 
Rajasthan Royals faced Mumbai Indians at the Wankhede Stadium yesterday and Mumbai fans would’ve felt confident ahead of this game, coming into it with three consecutive wins and hopes of qualification still alive. They lost the toss and were put in to bat on a good batting track and a very good opening stand followed.

Suryakumar Yadav and Evin Lewis put up an opening partnership of 87 at a good rate and a high total was expected. However, young Jofra Archer, who has often been spoken about as the x-factor bowler, came in and picked up 2 wickets in 2 balls, both off short deliveries.

Surya scored 38 and Lewis scored 60 but after that, none of the MI batsmen were able to settle down at the crease. Hardik Pandya punched a few over the fence, scoring 36(21) which helped Mumbai to 168/6 and they would’ve known that this was at least 15 runs below par. Archer and Ben Stokes picked up 2 wickets each for RR.

Now if Mumbai wanted to win this game, they would require the crucial wicket of England’s Jos Buttler. He came into this game with four consecutive fifties and he was very quick to change that to five consecutive fifties, equalling Virender Sehwag and becoming only the second person to have achieved this in the Indian Premier League; Sehwag achieved the same in IPL 2012.

He was unstoppable after crossing fifty and Mumbai were left clueless after a while. Buttler scored 95* in Rajasthan’s last game, narrowly missing a century and this time was no different as Sanju Samson hit a few sixes trying to finish off the game early, which left Buttler stranded in the nineties again – 94*.

Rajasthan ultimately completed a 7-wicket win with 2 full overs to spare. They will now play Kolkata and Bangalore in their last two games and Buttler’s form will be an extremely worrisome factor for these two opponents, both of who are vying for a spot in the IPL 2018 playoffs. Man of the Match: Jos Buttler.