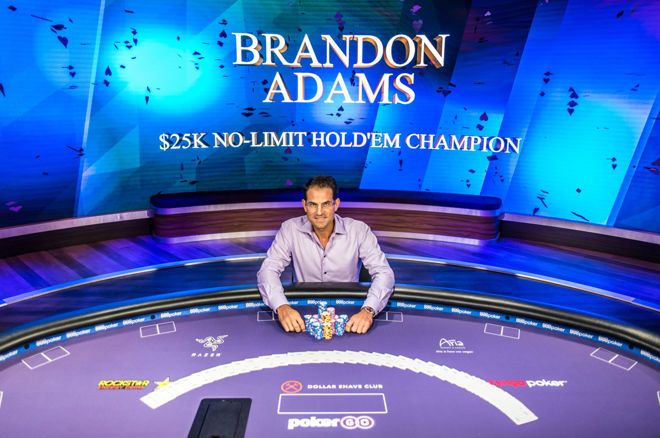 
The prestigious 2018 Poker Masters kicked off a couple of days ago, an annual event that is currently being hosted for the second time, thanks to Poker Central and the Aria Resort and Casino, Las Vegas. Seven high-stakes events will be held in the series and yesterday, Event #2 concluded with US poker pro Brandon Adams outlasting 50 entries in Event #2: $25,000 No Limit Hold’em, for which he was awarded $400,000, taking his career winnings past $3.5 million.

Adams was also leading the chip counts of the final six players at the end of Day 1 of the first event of the series. However, Day 2 wasn’t as good for him in that tournament, finishing 4th for a prize of $69,000. David Peters eventually shipped that tournament for the top prize of $193,200.

8 players were eventually paid out a minimum cash prize of $50,000 in Event #2, double of the original buy-in. It was a tough field with some of the best names in the poker industry, but none could get past Adams on the day, who won 300 points, in addition to his tournament winnings, moving him up to first place on the board. David Peters is at second place in the race to win the prestigious Purple Jacket.

Jared Jaffee was the final table chip leader moving into Day 2 of the tournament, and he eventually lost to Adams in heads-up, taking home $262k for finishing second.

The buy-ins and prize pools are only going to rise from here on. Currently, the $25k PLO Event is being played out, before the players move on to the $50k and $100k buy-in tournaments. Keep reading GutshotMagazine.com for an update on all these tournaments from the 2018 Poker Masters.