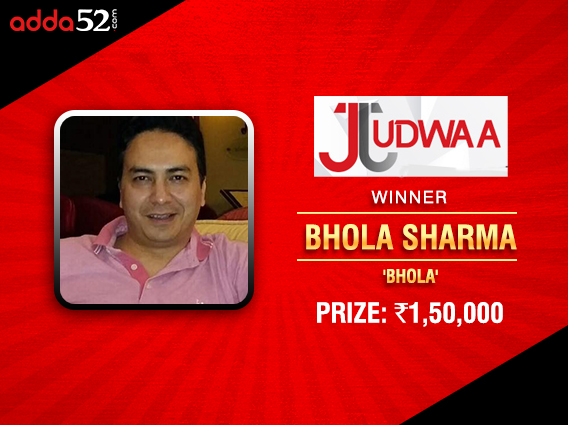 
Like we said yesterday, ‘Judwaa’ literally means twins and that’s why Adda52 hosts the Judwaa tournaments back to back, on Tuesday and Wednesday night each week. A couple of nights back, it was Deepak Singh who won this tournament, while last night’s title went to Bhola Sharma.

The two tournaments are exactly alike with a buy-in of INR 2,750 and a guaranteed prize pool of INR 5 lakh. Kicking off at 8pm last night, it was well into today morning when he had a winner in Bhola Sharma aka ‘bhola’ who is a regular on Adda52 and has won several titles in the past too.

Just over the last weekend, Sharma shipped the Whale 6-Max tournament for a whopping pay-out of INR 4.5 lakh and a few days later, he has more to add to his poker bankroll, winning the Judwaa and taking home the top prize of INR 1,50,000. Sharma has also won the Judwaa in the past and is a regular finisher in top Adda52 tournaments.

Last night, the Sikkim-based player won the title after beating Shekhar Singh aka ‘brat_poker’ in heads-up, with the latter having to settle for INR 95,000 for finishing second. Rajat Mahajan aka ‘happyfish’ and Goonjan Mall aka ‘gmtesting’ were other known players to finish in the money last night, from among the top 12 players who were awarded a minimum of INR 8,750 each.

In May this year, Sharma was having a great run where he shipped the Judwaa and the Godfather titles on consecutive nights, beating someone as good as Sumit Sapra in heads-up of Godfather. Clearly, he’s somewhere to watch out for when you play poker on Adda52. Don’t take him lightly!