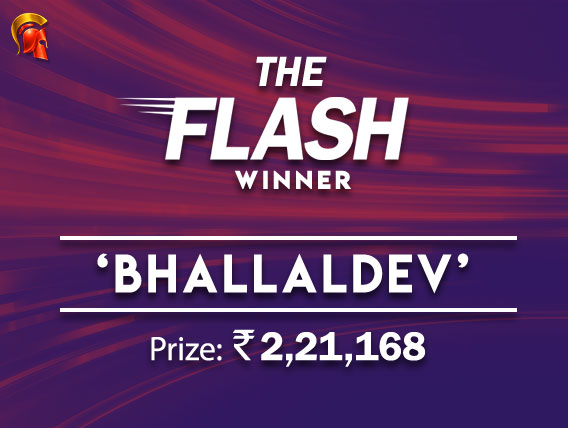 Bhallaldev wins The Flash on The Spartan Poker


Every day of the week, The Spartan Poker hosts a featured tournament for its loyal online poker players. Yesterday being a Thursday, the INR 11 lakh GTD tournament called The Flash was hosted, with a buy-in of INR 4,400, and it was ‘Bhallaldev’ who ultimately shipped this tournament.

A total of 262 entries were recorded to the tournament and the top 23 players were paid out a minimum cash prize of INR 12,760. The tournament kicked off at 7:30 pm IST last evening and less than 5 hours later, it was all over as the final two players struck a deal in heads up.

Bhallaldev was the automatic winner as he had a greater number of chips, taking home INR 2,21,166 for first place, while fishrag was awarded a pretty good prize for second place too – INR 2,07,833. The final table included other popular players like ‘stupefy’ and Anirban Das aka ‘pokernoob’. The winners were unavailable for any comments.

You can be a winner every day on The Spartan Poker, with high guarantee featured tournaments taking place each day, and hundreds of people being paid out too. Tonight’s featured tournament on the website is the INR 15 lakh GTD Flash tournament, which begins at 7:30 pm IST. Keep reading GutshotMagazine.com for a daily update on poker tournaments from India and around the world.