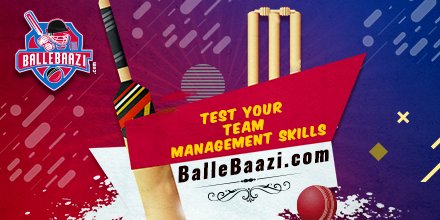 
There are quite a few gaming industries that are booming in India at the moment, and one of them is the fantasy sports industry. This skill game is spreading like wildfire and many companies have got into the fantasy sports business, with the industry leader Dream11 leading by example.

Dream11 signed MS Dhoni earlier this year as their brand ambassador, then later became an associate sponsor of the 2018 Vivo IPL and now very recently, they received a whopping $100 million in funding from Tencent Holdings. With such giant strides being made, many companies have laid foot into the industry with the intention of following Dream11’s example.

One of these companies is BalleBaazi, an online fantasy cricket gaming platform that was launched in January 2018 and since then, has grown tremendously, catering to a large user-base and offering different formats of the game such as Classic Fantasy, Batting Fantasy, and Bowling Fantasy.

The company recently launched its Android mobile gaming app and here, users can access sign-up and referral bonuses, private contests and much more as they would on the browser version of the website. Currently, the app has contests running for the Afghanistan Premier League 2018, and those who deposit using the app can use the code “APP50” (for one use on the app), to get a 50% bonus on a deposit between INR 100 to 1000.

Saurabh Chopra, BalleBaazi Co-founder and CEO, commented on the same, saying, “We have come out with the BalleBaazi app after receiving detailed feedback from hundreds of Cricket Fantasy players across the country. This has helped us to match the expectations of our users in the best way possible. We have received an overwhelming response from our users, thus motivating us to constantly work towards improving the product even further and add exciting new features in the near future.”