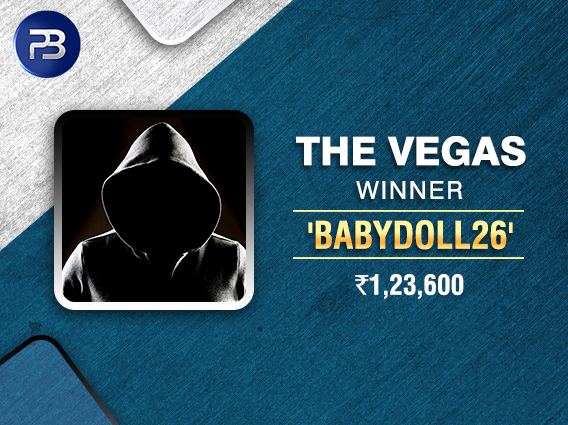 ‘Babydoll26’ wins The Vegas on PokerBaazi


The Vegas is one of PokerBaazi’s featured tournaments that takes place once a week and attracts a field consisting of some of the best poker players across the country. The tournament takes place every Wednesday night at 8pm and yesterday, we had another edition of The Vegas INR 6 lakh GTD.

The re-entry tournament has a buy-in of INR 2,200 and yesterday, a total of 309 entries (170 players + 139 re-entries) registered to the tournament which slightly beat the guarantee and created a new prize pool of INR 6.18 lakh. All these entries would’ve had their eyes on that top prize but alas, only one can walk away with the fame and glory.

Beating this field and winning yesterday was an anonymous player who goes by the name ‘Babydoll26’. He/she dominated everyone else on the night to be handsomely rewarded with the top prize of INR 1,23,600. Many regulars finished in the money with the top 27 being paid out a minimum cash prize of INR 7,725.

In heads-up, Babydoll26 beat Kiran Nair aka ‘4betScarface’ who had to settle for the runner-up prize of INR 92,700. Nair also won The Endeavour on PokerBaazi just last week and seems to be on a good run. Gutshot had a word with him after this second-place finish. He said, “It was a tough final table. I entered the final table 6/9 and was the chip leader with 3 players remaining. Unfortunately, I couldn’t close this one but full credit to the winner!”

Like he said, it was a packed final table. Finishing third was Yuvraj Singh aka ‘madnutscrazy’ who took home INR 71,070. Busting in fourth place was none other than Rubin Labroo aka ‘kornkid’ and this player needs no introduction. Tonight, The Summit will be hosted on PokerBaazi and you can get all updates on that tournament here on GutshotMagazine.com.