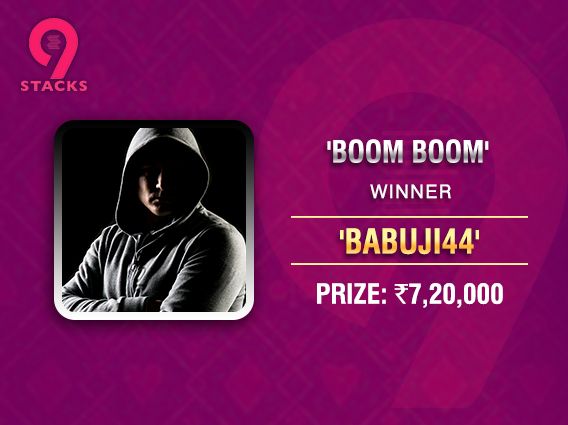 
9Stacks is one of the newer Indian online poker companies and since their inception, they’ve hosted quite a few unique tournaments, while also regularly giving players the chance to fly abroad and play in international poker tournaments. Very recently, they also launched Aussie100 and already awarded 15 package trips to the 2019 Aussie Millions series in Melbourne.

On 4th November, 9stacks hosted another special tournament called ‘Boom Boom INR 30 lakh GTD’, an extremely high-value tournament hosted for their players to celebrate the festive occasion of Diwali. As usual, plenty of top pros participated in this tournament, making it a massive success.

The tournament had a buy-in of INR 5,500 and it kicked off at 5pm with a total of 266 players joining by the end of the late registration period. A total of 108 re-buys were made and as the field narrowed down, a total of 45 places were paid out with a minimum cash prize of INR 15,000.

As the tournament progressed, players were more careful as big prizes were at stake and huge pay jumps at every position. Busting in third place for a handsome 6-figure prize of INR 3,09,000 was Vinay B aka ‘cantilever’, who made another huge bankroll addition. The player has many big wins across all major websites in India.

This left ‘Babuji44’ and ‘rahuldravid’ to battle it out in heads-up. The former preferred to stay anonymous while the latter is none other than Akshay Nasa, who has made a habit of winning everywhere, regardless of online or live. However, even though he made a brilliant run here on 9stacks, he wasn’t able to close the tournament.

Babuji44 was very good on the night, shipping the Boom Boom tournament and taking away the massive first-play pay-check of INR 7,20,000. On the other hand, Nasa missed the big pay-jump, but he was still pretty handsomely rewarded with the runner-up prize of INR 4,80,000. Keep reading GutshotMagazine.com for more updates on India’s best poker tournaments and promotions.