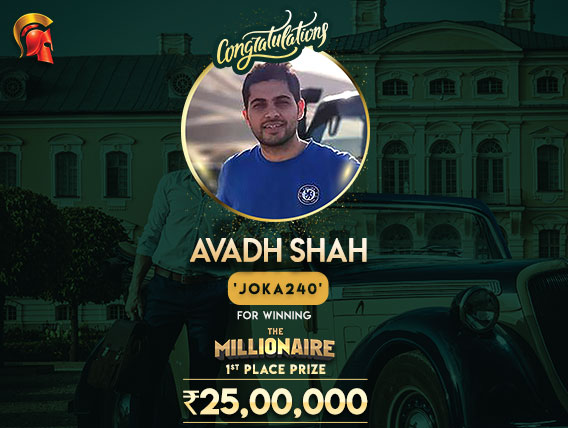 
Each month, Indian poker players wait for The Millionaire, which is hosted by The Spartan Poker and is known for being one of the biggest online poker tournaments in the country. It is usually held on the second Sunday of each month and that Sunday of August came yesterday.

A massive INR 1 crore guarantee is offered in this tournament each month and the top poker pros across the country are always gunning for the prestigious Millionaire title. Yesterday’s tournament was no different and after hours and hours of grinding on the virtual felts of Spartan, a winner was announced.

1,270 entries registered to the tournament, which meant some pretty stiff competition in this INR 7,700 buy-in tournament. From this field, the top 120 players were paid out a minimum cash of INR 20,000 and the player who emerged on top of this enormous field was Avadh Shah aka ‘Joka240’.

Remember, Shah is not new to winning big titles on Spartan, having won two consecutive Sunday SuperStack titles in May this year. If you thought that those two wins would’ve been massive bankroll boosts, imagine what this recent Millionaire win would be. Shah pocketed a whopping INR 25 lakh for last night’s victory!

The board opened 9d Jd Td 9s 5s and Shah ended victorious with two pairs – Tens and Nines. Tarsh001 wouldn’t have been too disappointed with this heads-up loss, as he still took home a massive paycheck of INR 15 lakh, while all of the top 10 finishers took home 6-figure prizes.

The tournament came to an end at 5:46am today morning, 11 hours and 46 minutes after it began last evening. Gutshot contacted Shah to know how elated he was after this big win. “The feeling is yet to sink in for me as well as this amount is huge. This last year has been crazy with multiple wins online and I have got platforms to showcase and learn poker skills at PSL (Andhra Bullets) and MATCH IPL (Delhi Aces) too during this time. Therefore, for a recreational poker player, there cannot be something bigger as part of his/her hobby,” he said.

Shah is basically a tourney player but loves to play 200/400 Omaha as well. He believes that cash games and Omaha are more fun, but he spends most of his time online playing MTT’s. We asked him about his journey through the Millionaire, to which he said, “It was surreal. I always had a decent stack through start and mid phases (3-40 bbs min). When the field whittled down to 30 odd people, I was in top ten stacks and that to me was a tough phase as there were a lot of regulars, so I had to play wisely.”

“A key hand was heads-up when I had 99 vs Tarsh’s AQ. Standard spot and I held. It was a 10 lakh difference between 1st and 2nd and this was very well worth that much. One other hand was when 9 people remained I think, I raised preflop on 64 suited spades from mid position. Cutoff calls and SB re-raises min. We both call and flop is 578 with two spades. Dream flop. SB bets, I call, Button re-raises 3x, SB shoves and rest is history. Made a huge stack by that which lasted till the end,” he said, recounting some of the key hands in the tournament.

Shah knew he could win it when the final table began as had been to this stage before and was confident of his FT play. Talking about his future plans in poker, he said, “I’ll keep grinding Sundays, Wednesdays and Tuesdays as they offer more value. Can’t put in full-time to poker as I have a running job alongside. Maybe I will go to Goa once/twice a year.”

He commented on The Spartan Poker and their promotions, saying, “They’re really good. Spartan offers so much value that there is no option but to play it.” He also told us what he planned on doing with the prize money of INR 25 lakh, saying, “Some will go in savings, some for trips, some for an APAC poker trip and some just for treating my friends.”

“I love the way how poker is getting recognition slowly in India through PR, news, online blogs, these articles etc. The only way is up from here,” he said on a parting note. Keep reading GutshotMagazine.com for similar interviews with winners of the biggest poker tournaments around the country.