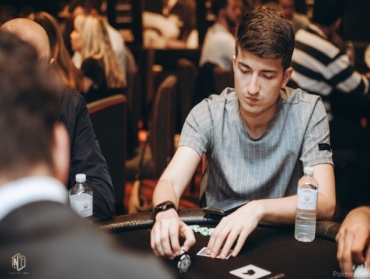 
The Eastern zone of the world is undergoing some of the major flagship tournaments. Besides the 2020 Red Dragon Manila, another notable and popular series Aussie Millions Poker Championship is underway for a 21 day prolong festival to host 23 different tournaments. One after another, the Crown Resort Melbourne is awarding the ultimate title holders. And so was yesterday when Event #2 H.O.R.S.E. announced the official champion Dzmitry Urbanovich after a heads-up deal to bag AUD 28,755 (~INR 14.20 Lakhs) in prize money!

The entire event attracted a total number of 42 players, despite the year’s field falling short of the 2019 figure, there were still plenty of big names in attendance including Rob Campbell, Phil Hui, Joe Hachem, Benny Glaser, Oliver Gill and so on. However, 8 players resumed the final day led by New Zealand’s Jan Suchanek who amassed a 6-figure stack of 119,300 and 6 players were guaranteed to cash.

The final table action began, bringing the tournament to the money bubble was the former Main Event champion Ari Engel. After battling for few hours Simon Chahine was eliminated in the 7th place. By this time, Urbanovich chipped up to around 200,000 with only 5 players remaining. The previous day chip leader fell in the 4th position securing AUD 10,395 and the native player Vasco Zapantzis exited in the third place, finally giving way to heads-up.

Julien Sitbon came into heads-up with over 516,500 chips when compared to Urbanovich’s 113,500 stacks but the latter battled back and eventually, the final hand saw Sitbon entering with short stack and unable to find any miracle card, the ANTON Championship Ring was shipped by the Polish player, Urbanovich, after a heads-up deal and Frenchman headed to the pay desk to secure AUD 27,000 for finishing in the runner-up position.

The champion sits in the 1st place in Poland’s All-Time money list for over $6 million and is recorded to have earned his career-best live cash in the 2015 EPT – 11 Super High Roller for an incredible $1.59 million. In 2018 Aussie Millions Turbo Shot Clock the winner finished in the 2nd place and third in the 2017 Aussie Millions PLO.

“Melbourne is my favourite place to play, I’ve never had a ring, never won a tournament in Australia. It’s perfect. I’ve actually never even cashed a mixed tournament here every year I’ve come, so nice to get my first cash in the first place! says the champion. “I liked the field, it was pretty good. I’m going to carry on from here and play as many Aussie Millions events as I can while I’m here.”

The seven-day long 2020 Aussie Millions Opening Event guarantees $1 million and last night the Crown Resort saw the registered field whittling down to another set of 35 hopefuls progressing to Day 2. And Flight 4 was topped by a native player Naim Mouchaileh accumulating a stack of 147,200, closely followed by Daniel Clemmet bagging 140,900 chips and in the third position Roland Rokita with 135,600 chips.

However, David Tang from Flight 3 still remains the overall chip leader, however, Flight 5 will observe another set of new entrants that is scheduled to commence today, 7 January at 12:10 pm local time. So, for the latest updates on poker news and tournaments around the world, keep reading GutshotMagazine.com and stay tuned!