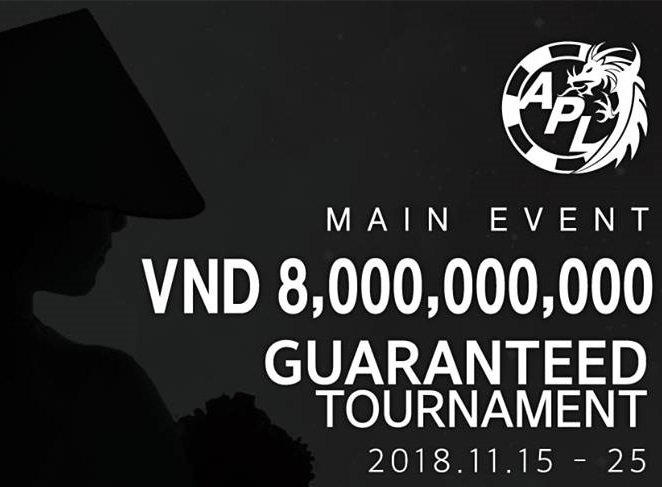 
It was earlier this year in February that the Asia Poker League (APL) conducted its inaugural edition APL Vol. 1 in the Filipino capital city. That successful first edition jumpstarted their plans to host the next edition, in May in Ho Chi Minh City, Vietnam. Success continued as there were large turnouts for this follow-up series which was capped by Singapore’s Lee Yin How winning the APL Vietnam Main Event for VND 1.4 billion (~INR 43 Lakhs). The extremely positive response garnered in that last series has prompted the APL to announce a second edition in the same venue from 15-25 November this year.

The APL has been pretty good for Indian players with three of them making scores in the February edition. While the May edition was even better and had Devesh Thapar and Adarsh Jayappa winning titles along with 4 more Indians cashing in the afore-mentioned APL Main Event. So the November edition should draw a fair number of participants from our shores.

This Volume 3 of the APL will take place over a slightly longer period of 10 days which means more events for players to participate in. The venue remains the Pro Poker Club in Ho Chi Minh City and a total of 18 events will be on schedule. Let’s take a look at some of the highlights of the schedule:-

The APL in collaboration with DeepStack Open are bringing the participating players an exciting opening event which will take place over two days. The DSO usually hosts 2-3 events which typically have a deep structure and about 5 times the normal amount of chips to players for this event. That will mean more play for those involved and while the DSO has proved to be very popular in Europe, this is the first time it will head to the shores of Asia. The tournament will take place on 15-16 November and feature a buy-in of VND 9.9 million (~INR 31,300). There will be two starting flights on first day at 1pm (40 minute levels) and 8pm, the latter of which will follow a Turbo format of 15 minute levels.

Of course all eyes will be focused on the biggest feature of the schedule which is the APL Main Event which featured a massive VND 8 billion (~2.53 crores) guaranteed prizepool. This is a significantly higher guarantee offered as compared to past editions. May’s edition drew a massive 864 entries for the Main Event and this hiked guarantee for the November edition is an indicator of the organisers’ belief for the next edition’s turnout. There are 4 starting flights for the Main Event followed three more days of play before the winner will be declared. The APL Main Event will take place from 18-24 November.

The Big Blind Ante format is steadily catching on with tournament organisers across the globe and the APL is no different with six of the events on schedule set to follow the BB Ante format.

A Highroller tournament is part of most tournament series and the APL is no different hosting this VND 33,000,000 (~INR 1,04,000) buy-in event starting on 22 November. There are two starting flights on the first two days followed by the final day’s play on 24 November.

It should be another interesting edition of the Asia Poker League and we will of course bring you all the coverage from that series as it happens right here at GutshotMagazine.com!