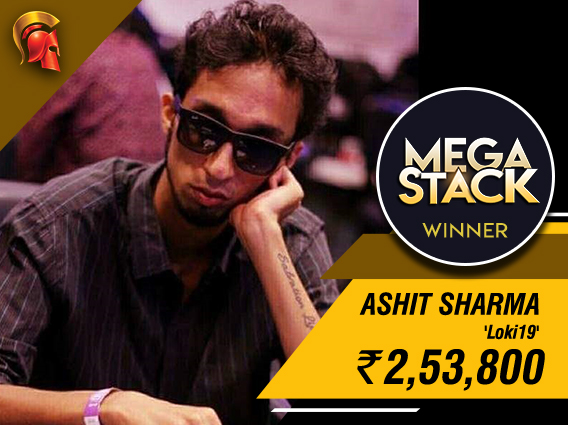 
Spartan Poker’s Tuesday feature tournament, Mega Stack INR 12 Lakhs GTD has been running since a long time and always attracts a good turnout. Yesterday’s tournament started at the regular 7.30 pm in the evening and drew 366 total entries to the virtual felts.

The entries individually chipped in the INR 3,300 amount to create the prize pool. The top 31 places were paid with the min-cash being INR 10,560. The player to emerge on top of the field was Ashit Sharma aka ‘Loki19’. He took home the first-place cash prize of INR 2,53,800 after beating a Destiny 8.0 SnG finalist ‘Quion’.

The last hand of the match had Sharma with almost 7:1 chip lead over Quion and he was about to deal the final fatal blow to his opponent. Quion haplessly shoved pre-flop with Kh Qh, decent hole cards. Sharma, with 8h As made the easy call. The board revealed 4c 2c 8c 6c 6s. Quion showed Sixes but was beaten by Sharma’s Eights and Sixes. The runner-up later settled for INR 1,70,880.

We spoke to Sharma after his win and he was delighted about this win. About the tournament, he said, “Mega Stack had always been that one tourney on Spartan where I hadn’t done well in the past and reached only couple of Final Tables previously. Mega Stack has always been a tough field to crack and yesterday also it proved the same. I played top notch throughout making some really tough folds in big spots and was a significant short stack when there were 4 people left.”

He further elaborated on the gameplay, “The chip leader had a massive stack, more than the next 3 combined. I was down to 6 big blinds at one point in the 4-handed. But I kept my cool and perseverance and tried to make it to heads-up. Once I reached heads-up I knew I had a chance of taking it down and refused to a deal. And it all panned out well!”

Sharma is a regular online player and has been had deep runs in the past. He won the now extinct Electra tournament on Spartan back in May 2018 and recently even won Spartan Flash in late January this year. With this win, he’ll be looking to convert the amount into more feature monies on Spartan and on various other platforms.