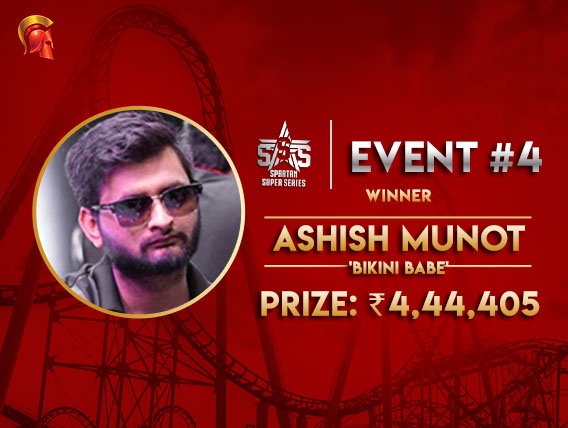 
Yesterday, The Spartan Poker launched yet another edition of the Spartan Super Series (SSS) on its platform, with INR 2.6+ crore up for grabs in guaranteed prizes over the course of 5 days between 21-25 November. Day 1 of this edition of SSS kicked off yesterday, with a total of 5 tournaments scheduled for the day.

Earlier today, we reported news of Anirban Das taking down the SSS PLO HR, which was the biggest tournament of the day. Apart from that, there was SSS Event #4 INR 12 lakh GTD which also attracted a few big names from the industry and plenty of big prizes were given away.

Beginning at 7:30pm last evening, it was a very long grind that lasted nearly 9 hours, ending at 4:12am this morning. A total field of 559 entries was recorded and each entry paid up an entry fee of INR 3,300. The guarantee was smashed, and a new prize pool of INR 16.77 lakh was generated. Eventually, it was the young and talented Ashish Munot who ended victorious, shipping the tournament and bagging the massive top prize of INR 4,44,405.

Playing under the name ‘Bikini Babe’ on Spartan, the player was unstoppable last night, beating many known names, many of which were among the top 40 players that were paid out (min cash – INR 10,062). In 10th place was also Anirban Das, who went on to win the final tournament of the day and end at #2 on the SSS Leaderboard as well.

Munot currently occupies the first place on the Leaderboard, where a total of INR 5 lakh is up for grabs during this series, including INR 2.5 lakh to the eventual winner. Munot has been having a good run in online and live poker of late, having also shipped the Kickoff Event at the Baadshah Live Series in Goa last month. Here’s a summary of the other tournaments played yesterday:

This was the opening event of the tournament and it attracted 152 entries. From this field, 21 players were paid out a minimum prize of INR 2,250 and the eventual champion was ‘moneymaniac’, who shipped the tournament for a prize of INR 43,200. In the final hand, he beat ‘ALBATROSS’ when the board ran dry after a pre-flop all-in and his high card Ace beat his opponent’s high card King.

The second tournament had a slightly bigger prize pool on offer and this thus attracted a slightly bigger field of 216 entries. From them, the top 27 were paid out INR 1,800 each and the player who received the biggest pay-check was Yasir Siddiqui aka ‘harvey1specter’ who won the top prize of INR 44,000 in this tournament. He beat ‘Sarku’ in heads-up, who collected INR 29,800 for finishing second. Siddiqui’s pocket Twos met a pair of Threes on the board to win with two pairs in the final hand – Threes and Twos!

Suraj Rathi aka ‘Bugsbunny08’ won the third tournament of the night, someone who has won before on Spartan. In October this year, he shipped the Big Daddy offering and won himself a trip to Goa. Last night, he outlasted 178 entries to win the top prize of INR 55,200, after beating ‘volkafilas’ in heads-up, who won INR 37,080 for finishing second. volkafilas shoved 500k on the river in the final hand, but his bluff was caught by Rathi, who had an Ace-high flush.