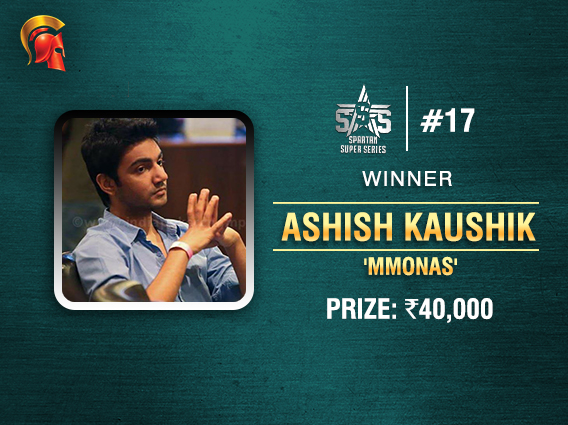 
Ashish Kaushik aka ‘mmonas’ was a player on a mission yesterday, which was Day 4 of the ongoing Spartan Super Series (SSS). The player registered to the opening event of the day and made a brilliant run, finishing second only to ‘Exit The Matrix’. However, he wasn’t going to take another second-place finish, eventually shipping the second tournament of the day on The Spartan Poker.

A total of 37 SSS tournaments have been scheduled between 10-16 September and SSS Event #17 INR 2 Lakh GTD kicked off yesterday afternoon, a knockout tournament with a buy-in of INR 800. This tournament attracted a total of 282 entries by the end of the late registration period.

Eventually, the INR 2 lakh prize pool was shared among the top 36 players with a minimum cash prize of INR 1,300 and Kaushik turned out to be the player taking away the biggest prize of all – INR 40,000. He beat ‘Imachampion’ in heads-up and the latter was paid out INR 28,000 for finishing second.

The tournament eventually ended in Level #41, where the blinds were running at 6,900/13,800 – 1,380 and mmonas had a 5:1 chip lead over Imachampion, both having fired three bullets each to reach this stage. At this stage, they decided to go all-in post-flop and we soon had our winner.

This hand saw Kaushik hitting a pair of Fives on the 2c 4c 5s flop and he shoved all-in, which was called by his opponent who had a pair of Deuces. The next two cards opened 3s and 9d, which saw Kaushik improving his hand to Nines and Fives, while Imachampion couldn’t improve on his pair of Twos.

GutshotMagazine.com is bringing to you timely updates on each and every SSS tournament taking place, so stay tuned for more tournament reports like this.