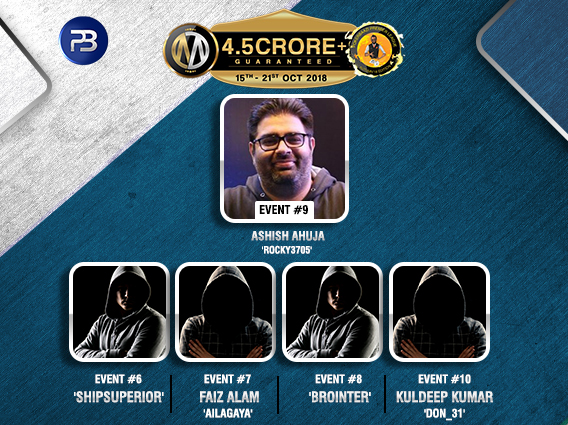 Amar Mehta aka ‘kidpoker0109’ cashed twice and maintained his lead on top of the PPL leaderboard with 1,820 points, while Anirban Das aka ‘pottysingh’ and Ashish Ahuja aka ‘rocky3705’ are in 2nd and 3rd with 1,454 and 1,412 points respectively.

Here’s an update on what happened yesterday:

A massive field of 745 entries registered to the opening event of the day which led to the guarantee being nearly doubled to a prize pool of INR 3,72,500. Eventually, it was ‘shipsuperior’ who won the tournament for a prize of INR 69,843 after also being in the action yesterday. He finished the day on #4 on the PPL Leaderboard with over INR 4 lakh in winnings thus far. In this tournament, he beat ‘GhatakTheGreat’ in heads-up, who won INR 51,218 for finishing second.

With a slightly different structure, this INR 2,200 buy-in tournament had a play time of just 60 minutes where 139 entries registered, and a prize pool of INR 2.78 lakh was generated. Eventually, it was Faiz Alam aka ‘AilaGaya’ who won the tournament for a prize of INR 28,745, while ‘bencb789’ came second for INR 27,160.

The guarantee crushing continued at the Autumn edition of the PPL series, with this INR 3,850 buy-in tournament bringing in a field of 422 entries, which saw the prize pool surging up to INR 14.77 lakh. By the time the tournament came to an end at 1:08am this morning, it was ‘brointer’ who was crowned champion for a prize of INR 2,88,015. In heads-up, he had to get past PokerBaazi regular Pranav Bang aka ‘pranav.bang1’ who also received a fat pay-check of INR 2,14,165.

This was the mega tournament of PPL Day 2. The featured tournament of the day. An extremely popular weekly tournament on PokerBaazi. Even here, the guarantee was passed as the tournament saw 753 entries in all, which created an INR 37.65 lakh prize pool. With a buy-in of INR 5,500, you know that only the best will be wanting to take part, and here, it was the very well-known pro, Ashish Ahuja aka ‘rocky3705’ who emerged victorious. Ahuja would’ve been over the moon as he earned a hefty payday of INR 6,77,700 after beating ‘Zillastar’ in heads-up, who also won a handsome prize amount of INR 4,98,862. Many big names like Shravan Chhabria and Akshay Nasa also finished on the FT of this tournament. This win took Ahuja to #3 on the PPL Leaderboard, with 4 cashes in the series so far.

The day wrapped up with a PLO tournament that kicked off at 9:30pm, with a buy-in of INR 1,375. Once again, the guarantee went for a toss as 528 entries totally registered to the event and a prize pool of INR 6.6 lakh was generated. From these, the top 44 were paid out a minimum cash prize of INR 3,300 but the player to take away the largest chunk of the prize pool was ‘don_31’ who won INR 1,25,400 for this effort. He beat ‘mowgumotu’ in heads-up, who took home INR 92,400 for finishing second.