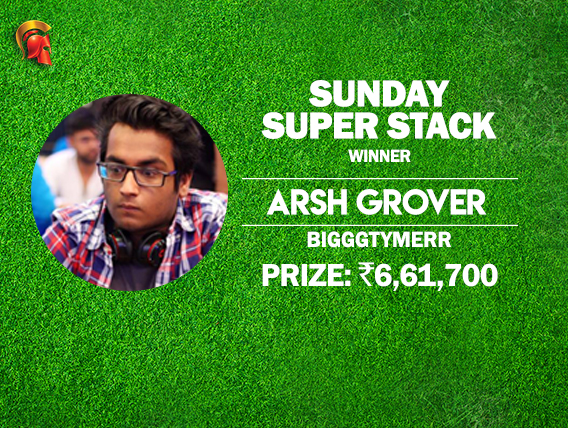 With a buy-in of INR 5,500, the tournament has a guaranteed prize pool of INR 20 lakh and this guarantee was crossed easily. 358 players and a total of 509 entries took the prize pool up to INR 25,45,000, and some of India’s top pros were among the top prizes. Eventually, it was Arsh Grover aka ‘BigggTymerR’ who shipped the tournament, adding to his list of online poker titles.

The first place is generally guaranteed a prize of INR 5 lakh but with the guarantee being crushed, Grover took home a handsome amount of INR 6,61,700 after beating another well-known player in heads up. He faced off against Anirban Das aka ‘pokernoob’, who took home INR 4,07,200 for second place.

The tournament began at 7:30 pm last evening and eventually ended after 3 am today morning. 50 places were paid out a minimum cash prize of INR 12,725 and these two top online grinders were the last men standing. The tournament finally ended when the blinds were running 70,000/140,000 – 17,500.

In the last hand, they bet at every stage, eventually going all-in after seeing the river card. The board opened 2-7-9-5-6 and Das held 7-6, giving him two pairs, but Grover held Q-8, which completed his straight on the river and gave him the pot, the Sunday SuperStack tournament and a payday of over INR 6 lakh.

Keep reading GutshotMagazine.com for regular updates on live and online poker tournaments from around the world.