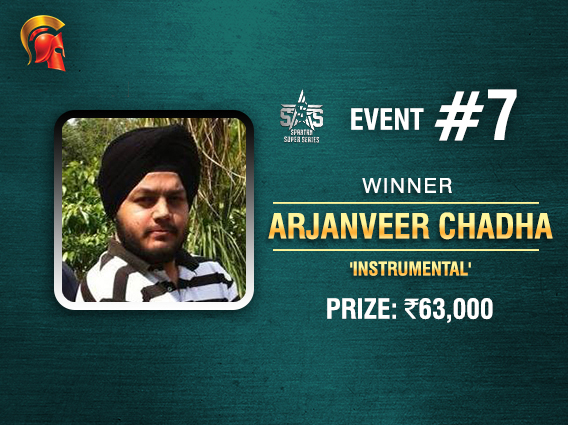 
Yesterday was just the second day of the ongoing Spartan Super Series (SSS) and the excitement has slowly been building up to the bigger tournaments. The total guaranteed prize pool for this series is over INR 4 crore and every poker player in the country wants to be a part of the action.

Arjanveer Chadha aka ‘instrumental’ is one player to watch out for in this series and on the SSS Leaderboard as well, where INR 10 lakh is being given away at the end of the series to the most consistent players. Yesterday, Chadha won the second tournament of the day, getting his first title of the series.

SSS Event #7 INR 2.5 Lakh GTD attracted 153 entries and the prize pool was taken up to INR 2,62,500, which was eventually shared among the top 21 finishers with a minimum cash prize of INR 3,281. Chadha took away the top prize of INR 63,000 for topping this field and winning the tournament last evening.

The final hand was even better as Chadha completed a straight on the river after both players were all-in pre-flop. Iyer was initially ahead with a pair of Fives but the river card changed Chadha’s luck which took him to another online poker title. Watch out for this player during the rest of the SSS series and keep reading GutshotMagazine.com for all updates on the same.