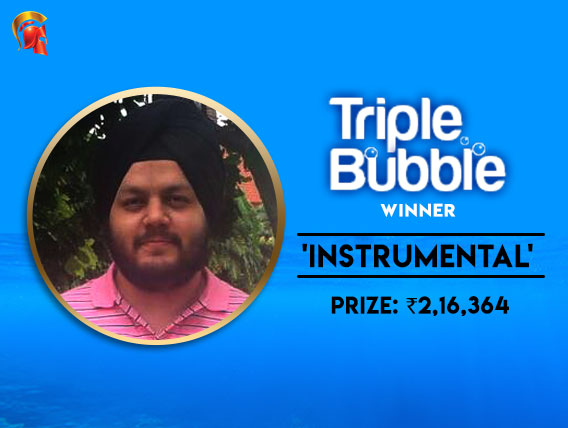 
The Triple Bubble is a recently launched tournament on The Spartan Poker, with an extremely unique concept. Just like the name suggests, it has three prize bubbles, rewarding the money bubble player with his entry fee refund, rewarding the final table bubble player with a ticket to the next Millionaire tournament, and the second-place finisher with tickets to both The Millionaire and the 2.o.K tournaments.

The Triple Bubble INR 9 Lakh GTD tournament is played every Friday night and it kicked off last night at 9pm, with a buy-in of INR 3,300. A total of 341 entries registered to the tournament, passing the advertised guarantee and creating a new prize pool of INR 10.23 lakh.

The top 31 players were paid out a minimum prize of INR 9,002 but the player who claimed the biggest chunk of this prize pool was none other than Arjanveer Chadha aka ‘instrumental’, who took away INR 2,16,365 for first place. He’s now making a habit of winning poker titles online, his most recent title coming just a few days back, winning The Roar on Adda52 this Monday.

Chadha came out on top of this field and was rewarded well for the effort. The tournament came to an end at 2:57am and Chadha had a brilliant night in poker, also finishing in the money with a 17th place finish in The Elite on Spartan, along with a runners-up finish in The Whale on Adda52, where he plays under the name ‘arjan30’.

Here, he beat ‘pokerdeal’ in heads-up, who took away the runner-up prize of INR 1,45,675 along with Two of a Kind and The Millionaire tickets; Chadha won the final hand with an Aces full of threes full house. ‘theprofessor’ was the Final Table bubble player, who won a ticket to the Millionaire for next month while ‘pshark’ was the money bubble player, getting a refund of his buy-in of INR 3,300.

Gutshot had a word with Chadha after this victory, congratulating and asking his views on the same. He said, “Thanks. Just a crazy day at the felt. Shipped Spartan’s Elite Lite, and then the Triple Bubble. Just missed the hat trick in Whale on Adda52. Was in my zone yesterday.” Keep reading GutshotMagazine.com for more updates on the biggest poker tournaments in India.