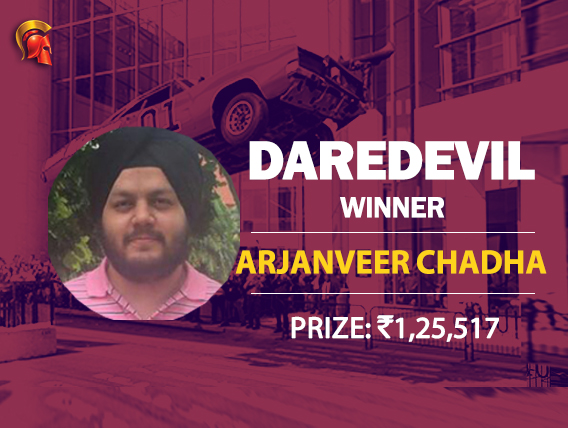 
It’s a pretty popular tournament among the online regs due to its guarantee and an interesting twist to its format. The DareDevil tournament at The Spartan Poker takes place every Saturday evening and is in fact part of their daily featured tournament line-up. A prizepool of INR 5 Lakhs is guaranteed to participating players and the afore-mentioned twist is that in this rebuy tournament, busted players can buy back in at 50% of the original buy-in!

That makes it an interesting value proposition for participants and 81 of them decided to gather at the virtuals felts to take a shot at the biggest chunk of that prizepool. The last man standing at the end of it all claiming that biggest chunk was Arjanveer Chadha who plays as ‘instrumental’ at The Spartan Poker. And this is the second consecutive week that he has scored a win in this very same tournament.

81 participating entries meant that the prizepool crossed it guarantee ending up at INR 5,70,000 which was to be distributed to the top 11 players who would land up in the money. The money finishers were assured a minimum payday of INR 14,250 for their efforts. Couple of familiar names on that final table along with instrumental were Anirban ‘pokernoob’ Das and ‘HomelessOnWiFi’. Das continued with his remarkable consistency and once again made it deep this time for a 5th place finish which netted him a payday of INR 44,460.

HomelessOnWifi too seems to like this particular tournament as he too like instrumental ran deep in last week’s DareDevil. This time he ended up one spot lower, his end coming at the hands of the eventual winner. With a pretty good hand of Ah Kd, HomelessOnWifi decided to put it all-in after an initial raise by ’tiltdaY’. Seeing that shove, tiltdaY got out of the way as did ‘NIMMAJJI’ but instrumental quickly made the call holding pocket Kings (Ks Kc). It would need a big slice of slice to for things to go the way of HomelessOnWiFi but the board of 6d 2d 2c 2s Qs was not what he was looking and with that he was eliminated in 4th place for a nice payday nonetheless of INR 56,145.

The remaining 3 players played a couple of more hands before they decided to chop up the remaining prizepool. As per an ICM deal, instrumental took down the title and top prize of INR 1,25,517, NIMMAJI got 2nd place and INR 1,11,080 while tiltdaY rounded off the top three with a payday of INR 1,04,547.

Healthy scores for the top 3 finishers and we’re sure they will take their shot at the Sunday’s featured event i..e SuperStack and of course not to forget Spartan’s signature tournament The Millionaire will also take place later today.

We will bring updates on all those winners so stay tuned to GutshotMagazine.com tomorrow for those!