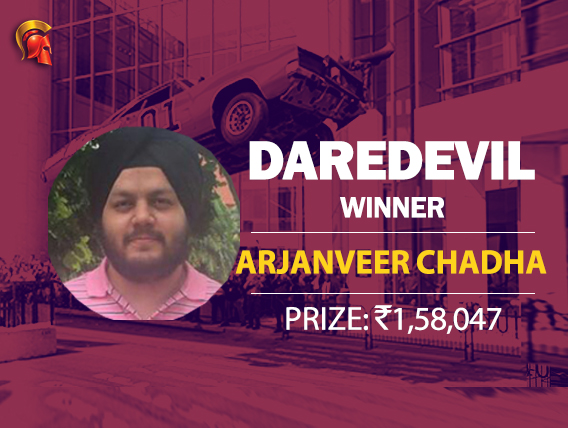 
Consistency. Something all players are vying for… whether it is on a sports field or on the poker felt. Being consistent and in the zone is why the good players end up being winning players in the long run. One such reg at the online felts is Arjanveer Chadha who has been putting in the time and effort and it is showing in his recent results. From winning a title at the India Online Poker Championship’s July edition as well as scoring numberous deep finishes in the series, Chadha has now added another notch on his winning post. Playing as ‘instrumental’, he claimed victory in last night’s DareDevil tournament held at The Spartan Poker.

This Saturday evening tournament is part of Spartan’s set of daily featured tournaments which has a buy-in of INR 4,400 and follows a Rebuy format. To make things interesting, the website allows busted players to buy-in for 50% of the original buy-in amount i.e. INR 2,200. So plenty of value for players who are looking to kick their Saturday evening grind off to a profitable start. 84 entries last night took up the prizepool to INR 6,22,000 sailing past the INR 5 Lakhs guarantee. 11 players would share the prizepool with some familiar names like Sumit ‘mrgr33n’ Sapra and IOPC July title winner Suhit ‘trickpoker’ Khanna making deep finishes. Sapra (10th place) made the min-cash amount of INR 15,550 while Khanna went one better with INR 23,325 for his 8th place finish. Heads-up battle took place between instrumental and another familiar reg in ‘Strangeplay’. With his elimination of ‘HomelessOnWifi’ in 3rd place, instrumental crossed over a million in chips giving him an almost exactly 2:1 lead over his opponent.

Heads-up lasted about 5 hands after which both players decided to make a deal to share the remaining prizepool basis an ICM deal. As a result of his bigger stack, instrumental won the title and INR 1,58,047 as first place prize. Strangeplay made yet another deep money finish but would have to settle for 2nd place prize of INR 1,34,603.

That was it for Saturday night’s feature tournament coverage. Tonight players will descend upon the virtual felts of The Spartan Poker to take a shot at the super value Sunday Superstack but before that the highlight of this first Sunday of the month is the Two of a Kind (2.o.K) which kicks off at 4:30 pm this evening so get in on that action. Stay tuned to GutshotMagazine as we bring you roundups from both tomorrow at this time.