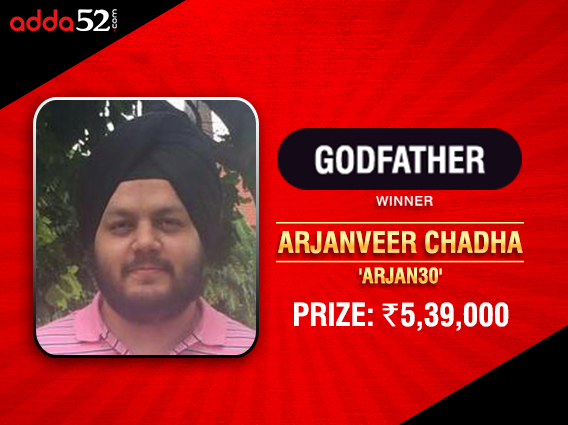 
Winning major poker titles online is nothing new for Arjanveer Chadha. This player follows the ‘Eat, Sleep, Grind, Repeat’ schedule and he has been pretty successful with this routine so far. Every morning when Gutshot scrolls through results of the top online featured tournaments in India, we aren’t surprised to see Chadha among the top finishers.

Last night, he added another victory to his trophy cabinet, this time shipping the Adda52 Godfather INR 20 lakh GTD tournament. The specialty of this offering is not just the big prize pool but also the chance to win an international poker package trip. Godfather 6.0 is currently underway, and the series winner wins an INR 7 lakh package trip to the 2019 Aussie Millions in Melbourne.

Last night, Godfather kicked off at its usual time of 8pm on Adda52 and by the end of the late registration period, a total of 440 entries had joined, beating the guarantee and generating a new prize pool of INR 22 lakh. With this, chances of winning a cash prize increases and eventually, the top 49 places were paid out a minimum of INR 12,100.

The Godfather tournament usually sees a very tough field, and why not? With a buy-in of INR 5,500, players have the chance to win lakhs in prizes and then also win a trip to Australia and multiply their winnings there. Chadha similarly had to power through a packed field last night, making it a tough win even for a player like him who has made winning a habit of late.

Before he emerged victorious, some of the Adda52 regulars who were knocked out with min-cashes included Siddharth Karia (42nd) and Rajat Sharma (47th), with the latter however, making amends on Spartan where he won The Flash last night. Mihir Thakkar aka ‘gameofdeath’ made a good run and busted in 26th place, having already booked a spot in the Aussie Finale SnG, winning the first tournament of Godfather 6.0.

Just last week, Kavish Kukreja aka ‘narcoss’ won the Godfather tournament but he made another good run yesterday, busting in 5th and missing the chance to win another tournament to take a double starting stack into the Finale SnG. He won the first 6-figure score of last night’s tournament – INR 1,10,000.

The next to bust was another serious grinder in Sahil Mahboobani who finished in 4th place for a pay-day of INR 1,65,000. Mahboobani has been on a hot run after his runner-up finish at the 2018 WPT India Main Event a couple of weeks back. ‘drpokerabc’ was the next to hit the rail finishing 3rd for INR 2,20,000.

Heads-up then began between Chadha and Sajal Gupta aka ‘sa_jal’. Gupta eventually had to settle for the runner-up prize of INR 3,19,000 but it was still a very impressive run from him. On the other hand, Chadha shipped another online title, winning INR 5,39,000 in prize money. From this prize, INR 77,777 will be deducted towards his seat into the Godfather Aussie Finale SnG.

Gutshot caught up with Chadha, who won his major online title in a couple of weeks. He said, “It felt good to be back to winning ways after bricking the WPT India series. I then took a week off vacationing in Goa itself, which helped me recharge and left me hungry for the upcoming tournaments.”