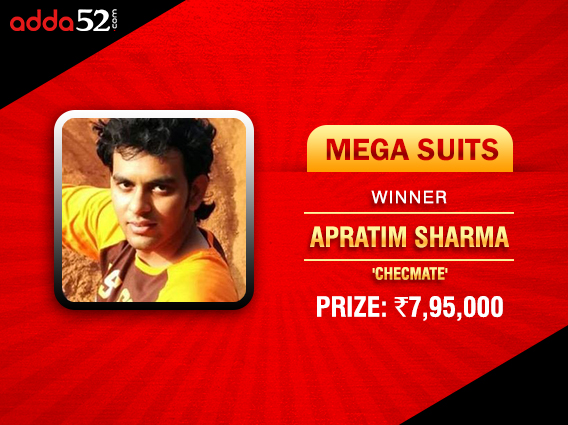 Yesterday was another edition of the INR 30 lakh GTD Mega Suits tournament on Adda52 and plenty of India’s top pros were a part of the field in search of another big online score. And of course, bragging rights. However, only one person can walk away with top honours and yesterday, that player was Apratim Sharma aka ‘checmate’.

Sharma has been a regular winner on most Indian poker platforms, especially Spartan, where he won The Flash just a couple of weeks back and prior to that, won the IOPC Daredevil tournament as well in July. Now, he decided to take down a major tournament on Adda52.

The Mega Suits costs each entry a buy-in of INR 5,500 and yesterday’s tournament which began at 5pm IST got itself a total of 571 entries (including 252 re-entries). The tournament was an extremely long one that lasted over 10 hours, eventually coming to an end by 3:01am this morning.

Apratim Sharma endured this long grind and was very well rewarded for the same by Adda52, who won the biggest cash prize of the night, taking away INR 7,95,000 for first place. At the end, Sharma beat ‘vane_shado’ in heads up, with the latter receiving a pay-check of INR 4,57,500 for finishing in second place.

It was a good tournament for Siddarth Singhvi aka ‘badtameez_donk’ too, who finished 4th for INR 2,50,500, after also shipping the Adda52 Millions on the same night. Arjun Agrawal aka ‘arjunagrawal05’ also cashed in 15th place after shipping the Chip Up Series Main Event. Gutshot caught up with the winner, Sharma, to ask him for a comment on the Mega Suits victory.

He said, “It was a really fun tournament to play. I played quite aggressive in the beginning to gain a big stack, and then played solid during late stages once I had a good stack. I made the final table 7th out of 8 in chips. Then, I got doubled up in a cooler situation to become a mid-stack. Then one important hand happened, where I got rewarded by the chip leader’s aggression. I limped QQ utg, chip leader on the bb raised. I wanted to disguise my hand and just called. Flop was 843cc and he 3x pot jammed on the flop with nothing Jd9d, and I called :). This gave me a chip lead, and then I held on to it to take down this tourney.”