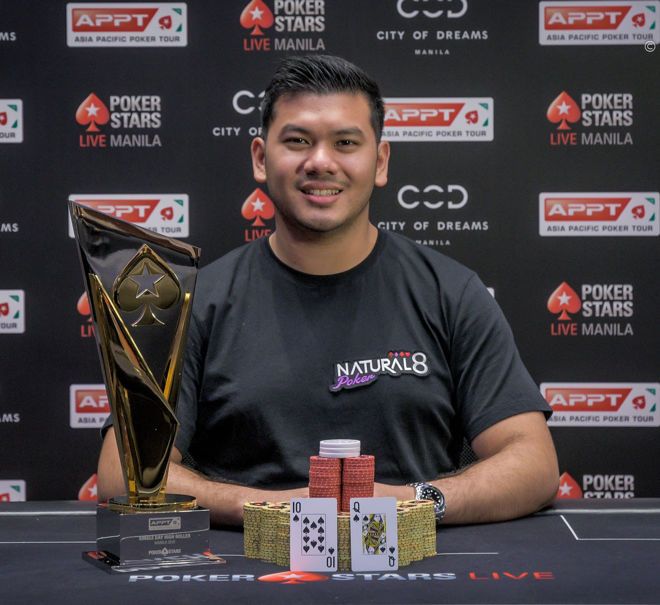 
It was another full house at the APPT Manila as the ?150,000 Single Day High Roller played out concurrently with the APPT National and Megastack. The tournament attracted some of the Asian poker circuit’s top professionals, drawing a field of 86 entrants and generating a prize pool of ?11,511,960 (~INR 1.5 Crores).

Both Team PokerStars Pros put up a good fight, with Lin finishing seventh and Lew taking sixth, but in the end it proved to be a battle of the Mikes, with Soyza and Takayama battling it out heads-up for the trophy and title. The pair came into the confrontation evenly stacked, but Soyza soon seized a lead he would not relinquish. In the final hand, the Filipino player moved all-in pre-flop with A♥ 6♥ with Soyza making the call with Q♠ T♠.

The final board ran out a decisive 2♠ Q♦ 7♥ 9♠ J♠ to grant Soyza the win, his second High Roller title, and his third PokerStars LIVE title. “What can I say, I’m running good!” said a smiling Soyza immediately after his victory, which brings his total live earnings up to over $1.9 million, though his position at #4 on the Malaysia All-Time-Money List remains unchanged.

Takayama will not be too disappointed with his runner-up finish, however, having all but locked up the 2018 Asia Player of the Year race, which concludes at the end of this series. The Philippines first homegrown WSOP bracelet winner took home ?2,251,000 for second place to bring his total live earnings up to over $932,000, keeping him at #3 on the Philippines All Time Money List.