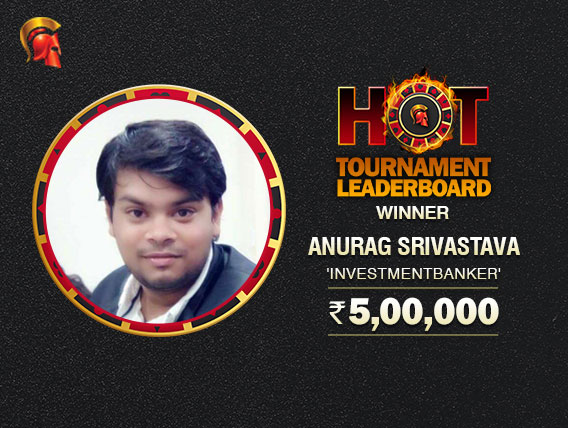 
‘InvestmentBanker’ aka Anurag Srivastava would’ve laughed his way to the bank last night, having won the Mega Stack as well as a monthly leaderboard on The Spartan Poker. For regular players on Spartan, you would know how tough it has been to win some chips from this man. He played well and showed brilliant consistency throughout the month, which led to him topping July’s Hot Tournament Leaderboard on Spartan.

He continued crushing throughout the month and the final victory gave him enough of points to go to the top of the Hot Tournament Leaderboard, for which he was awarded an additional INR 5 lakh prize. He played in a total of 38 tournaments in the months and gained 4,256 leaderboard points, putting him just above Suhit Khanna aka ‘trickpoker’, who had 4,052 leaderboard points.

Khanna played in a total of 52 tournaments in the month and the highlight for him was winning The Flash tournament during the recent India Online Poker Championship (IOPC). He was awarded INR 3 lakh for finishing second on the leaderboard and Ashish Ahuja finished third for INR 2 lakh. He shipped the Big Daddy a couple of days back, while also winning a Mega Freeze tournament at the start of the month.

Top five finishes on the Hot Tournament Leaderboard (with prizes in INR):

We caught up with Srivastava after he topped this mega leaderboard on Spartan. The 25-year old has completed his MBA in Finance and was introduced to poker by Zynga way back in 2010. “I played on PokerStars back in 2011, but just micros and freerolls. I didn’t take poker seriously until 2017,” he said about his start to poker.

Talking about winning this big challenge on Spartan, Srivastava said, “It feels great to win a month long leaderboard. I’ve played almost every day and I’m happy with the results. The challenge was that I had to outright ship the Mega Stack on the last day of the month to win the leaderboard. And I won. The highlight is that I won a tournament on the first day as well as the last day of the month.”

Others who finished in the top ten of the Hot Leaderboard include ‘SixthSense03’, ‘instrumental’, ‘SFTBNIAH’, ‘DONKAKING’, and ‘effuno’. Remember, the Hot Tournament Leaderboard for the month of August will also feature the Triple Bubble tournament, which is one of three new tournament offerings by The Spartan Poker.

Keep reading GutshotMagazine.com for similar updates from the world of poker.