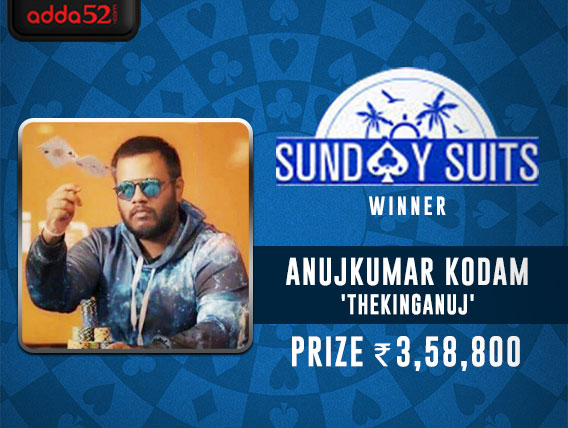 
Everyone loves the Sunday grind in India, with all of the top companies scheduling their top tournaments for this holiday. Adda52 is one of India’s best poker companies and they do the same, hosting the INR 10 lakh GTD Sunday Suits and the INR 20 lakh GTD Millions tournament each Sunday.

These tournaments generally see a good participation and yesterday was no exception, with the Sunday Suits recording a total of 460 entries that beat the guarantee and created a new prize pool of INR 13.8 lakh. This prize pool was eventually shared among the top 27 players, with a minimum cash prize of INR 8,280.

Coming out on top of this field on Adda52 and shipping yesterday’s Sunday Suits tournament (not for the first time) was Anujkumar Kodam aka ‘thekinganuj’, who was paid out INR 3,58,800 for first-place, thus making a healthy addition to his poker bankroll. He beat ‘MegaFish1’ in heads-up, who received INR 2,27,700 for finishing second.

INR 3,300 was the buy-in to this tournament which kicked off at 5pm last evening. Each player was given a starting stack of 15,000 chips and after 9 hours and 10 minutes, everyone except Kodam had busted their chip stacks. Kodam has been making big cashes in online poker tournaments since a while now, while also registering two live cashes last year, in Macau and in Rozvadov.

Gutshot caught up with the winner after this tournament victory on Adda52. He said, “Nice to ship the Sunday suits again! Adda52 has definitely one of the better structures, with good playability in late stages. Was a pretty fast FT though, got lucky in spots that mattered! Good day at the desk, on to the next one!”

For those who have been in the industry since a while now, you will know that Kodam was also the winner of the first every MoneyMaker tournament on PokerBaazi, for which he was awarded a massive prize of INR 30.27 Lakh, playing under the username ‘aatmaan’ and putting his name down in the record books.

Keep reading GutshotMagazine.com for more updates on the biggest and best poker tournaments from around the world.

Don’t have an account on Adda52 as yet? You can join their platform and be one of the big winners of the Adda52 Chip Up Series, or any of their other top tournaments. To do so, sign-up HERE.