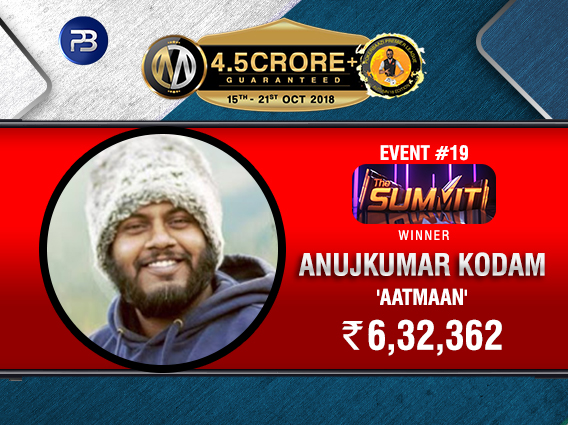 
The PokerBaazi Premier League (PPL) Autumn Edition has finished 4 days so far and it’s safe to say that this edition of the PPL is one of the most successful editions so far, with the guarantees in all except one (PPL #18) tournament so far being crushed, and lakhs of rupees being given away in prizes already on PokerBaazi.

Yesterday was Day 4 of this edition of the PPL and a couple of highlight tournaments were scheduled for the day, including the featured tournament PPL Event #19: INR 20 Lakh GTD The Summit Monster Stack and the extremely high-value PPL Event #20: INR 50 Lakh GTD HighRoller 6-Max.

The Summit kicked off at 8pm as it does every Thursday night, but this was the PPL edition, one which had an increased guaranteed prize pool. With a buy-in of INR 8,250 and a field of 438 entries (242 players + 196 re-entries), this guarantee was absolutely smashed, creating a new prize pool of INR 32.85 lakh.

As the night passed on, the registration period ended and eventually, players also reached the money bubble. The top 39 places were paid out a minimum of INR 24,637, which was 3x the entry fee paid. There were several pros and regs finishing in the money but the player to ship the tournament and take away the biggest prize of INR 6,32,362 was Anujkumar Kodam aka ‘aatmaan’.

Kodam is a regular online player and yesterday, he grinded for over 7 hours as he beat Harsh Dembla aka ‘dembla’ in heads-up, with the latter taking away the runner-up prize of INR 4,68,112. A total of seven players took home 6-figure pay-days, including Akshay Nasa who finished 6th for INR 1,39,612 and Abhisek Panda who came 7th for INR 1,06,762.

Gutshot caught up with Kodam after this victory, whose last notable victory came in September, when he shipped Adda52’s Sunday Suits. Talking about last night’s tournament, he was being humble by saying, “I’m grateful for whatever life has to offer. I just got lucky last night.” He also spoke about the series itself, saying, “As usual, a great job by the PokerBaazi guys for putting together another GTD crushing series.”