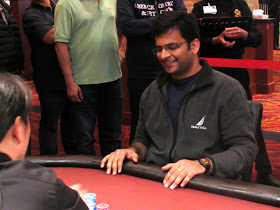 
Recently, we reported about Indian poker player Anshul Kulshrestha making the final 10 of the Bay 101 $5,200 Main Event, which attracted a massive field of 290 entries which included some of the best poker players in USA and other places. The player was set to record a massive score on Day 3 of the tournament and he did indeed, but not the usual way you would expect one to in a poker tournament.

The 10 players were set to kick off Day 3 when one player was reported to have had a fever and because of the ongoing coronavirus scare across the world, they decided on a 10-way ICM deal to call off proceedings without a single hand being played in the San Jose Bay 101 Casino in California.

The minimum that Kulshrestha would’ve been guaranteed of was around $24k which was going out to 10th place, but he ended up claiming much more after the deal numbers were out. He ended officially in 5th place as per current chip counts, taking home a humongous cash prize of $101,410 (~INR 75 Lakh) which was his career-best score by a long way.

As per the deal, chip leader Craig Varnell went on to be declared the official winner while Kristen Bicknell finished in second place. Indian-origin player Navin Mohan finished in third place while Anthony Zinno and Anthony Spinella were some of the other known names that were among the final prizes.

While there were no reported COVID-19 cases at the venue, the casino did the right thing and announced voluntary closure from Saturday, 14th March. For similar poker updates from India and across the world, stay tuned to GutshotMagazine.com.