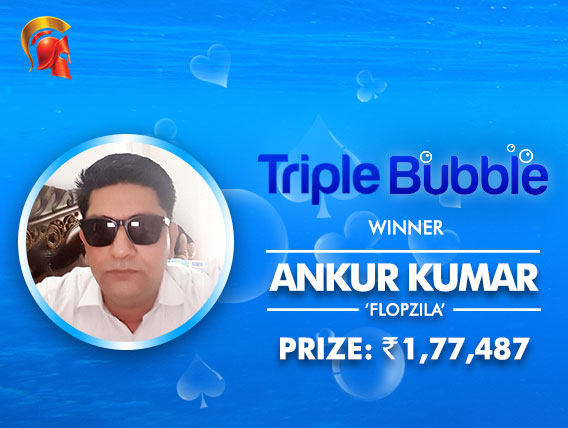 
Ankur Kumar emerged victorious in the Triple Bubble event last night at The Spartan Poker. Kumar who plays under the moniker ‘FLOPZILA’ outlasted 200 entries to claim INR 1,77,487 for the first place finish. Kumar is not new to the poker scene having claimed a Spartan Super Series (SSS) title in the recent past. Coming back to the Triple Bubble, this 9L GTD tournament with a buy-in of INR 3,300 gave payouts to the top 20 places with a min-cash of INR 12,060. Kumar defeated ‘Plumber’ in heads-up battle and the latter took home a cash prize of INR 144,905 for runner-up.

The tournament ended in Level #35  with blinds running 3,800-7,600-760 where ‘FLOPZILA’ had 8s 2d, ‘LoveCheese’ had 5h Kc and ‘Plumber’ was holding Jc Ks. The pre-flop action saw a fold from ‘FLOPZILA’ (D), ‘LoveCheese’ (SB) completed the blinds and ‘Plumber’ (BB) checked. On the flop 5s 7d 5d, ‘Plumber’ folds to ‘LoveCheese’s bet. After this action, all three players decided to make a deal and basis ICM, the title went to ‘FLOPZILA’.

Gutshot spoke to Noida resident Kumar on the following day about some of his key hands, “I was almost down to 8 BB’s when on bubble. I was dealt pocket 33s and I shoved which was called by two players and got a triple up. That was the game changer and then in the next hand itself, I got a double up with Ace-King and I landed into the top 5. On final table, we had big pros like Abhishek Rathod sir, Wilson and Faiz but played very tight, I was just looking to pick my spots without taking many risks and finally busted 3 players. The remaining three of us decided for a deal. Playing on The Spartan Poker is always fun and looking forward to just improve my game day by day as there is still much to learn. Thanks!”