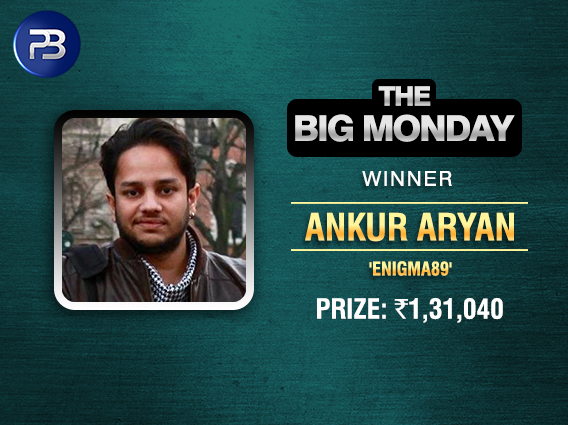 
Who cares about Monday blues, when you have daily featured tournaments to play on all the major poker websites in India? One of these tournaments played every Monday night on PokerBaazi is The Big Monday INR 5 lakh GTD tournament, which kicked off yesterday at 8pm.

With a buy-in of INR 3,850, players are allowed a maximum of 5 re-entries in this tournament, and a total of 156 entries (97 players + 59 re-entries) participated. This beat the guarantee and a new prize pool of INR 5.46 lakh was created, eventually being shared among the top 15 finishers, with a min-cash of INR 12,285.

Coming out on top of this field and bagging the top prize of the night was none other than Ankur Aryan aka ‘enigma89’, who won INR 1,31,040 and seems to be having a good run on PokerBaazi at the moment. He shipped the INR 10 lakh GTD Endeavour tournament on PokerBaazi just last week, and now has made another major bankroll addition.

His final opponent was ‎Sagar Choudhury aka ‘sagarpupul’, another regular on PokerBaazi final tables. Aryan finally bagged all of ‎Choudhury’s chips by 1:45am this morning, and the latter had to settle for the runner-up prize of INR 95,550. Finishing third was another regular player Sanjeeta Kumari aka ‘realkidsanju’, who was awarded INR 69,615 for finishing third. Another known figure was Akshay Nasa aka ‘sherlock52’ who finished 8th in this tournament last night.

Aryan finished with the biggest prize of the night on PokerBaazi, and he will be wanting to continue this good run in online poker. Tonight, their INR 10 lakh Endeavour tournament will be hosted once again, and Aryan will be eyeing back-to back titles in that tournament. When Gutshot caught up with Aryan, he said, “My journey with Baazi is fairly new, so shipping small games also gives a high. Post shipping Endeavour last week, Big Monday came as a pleasant surprise to me as well. From 2/50 to 39/40 to Top stack in FT and finally shipping it was one roller coaster ride.”

Keep reading GutshotMagazine.com for regular updates on the top poker tournaments in India.