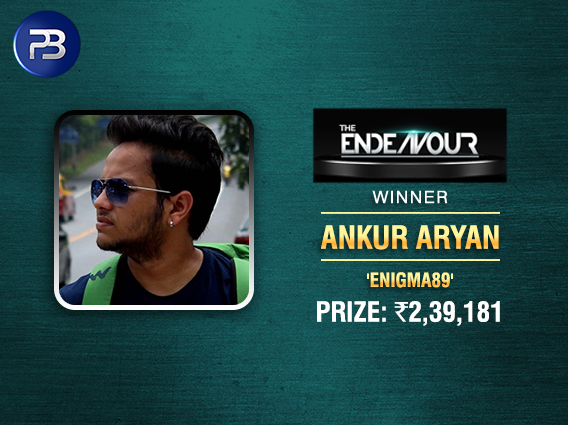 
The top poker companies in India all have some very popular online tournaments and for PokerBaazi, the INR 10 lakh GTD Endeavour tournament is one of these popular tournaments. The tournament takes place every Tuesday night at 8pm, and more often than not, the guarantee is beaten.

Last night, the INR 3,850 buy-in tournament was hosted, and it kicked off at the same time as Adda52’s Judwaa, which was won by Vinay B. However, Endeavour wasn’t affected, with 355 entries (227 players + 128 re-entries) registering and beating the guarantee once again.

At the end of this tournament last night, it was Ankur Aryan aka ‘enigma89’ who took home top honours, beating this field packed with top Indian pros and being rewarded with INR 2,39,181 for his efforts. Aryan made a useful addition to his poker bankroll, with his biggest recent victory coming in the July IOPC series on Spartan, where he took down the Super High Roller.

Gutshot had a word with Aryan after he shipped the Endeavour. He said, “The last couple of months were good for me with a few deep finishes. However, post shipping the Super High Roller on Spartan, I wasn’t able to ship any game. While I came 2nd in Whale couple of weeks back, I wanted to ship Endeavour when I made it to the final table. It felt good as I have hardly played on PokerBaazi. Hope the run continues.”

His heads-up opponent was Rubin Labroo aka ‘kornkid’, and this guy has been winning titles all over the place, so Aryan had to be good to beat him. Labroo won the BSS SuperStack on PokerBaazi just a couple of days back, while taking away INR 1,77,056 for finishing second here.

We also caught up with Labroo after he made another brilliant run on PokerBaazi. He said, “The Final Table was good. I ran really good to get there. Hope to close out the next Endeavour.” Another player who made a good run was Anujkumar Kodam aka ‘aatmaan’, who finished 4th for nearly a lakh rupees, after recently shipping Adda52’s Sunday Suits tournament.

Don’t have an account on PokerBaazi? If you wish to play and become the next big Endeavour winner on their new platform, sign-up now by clicking HERE.