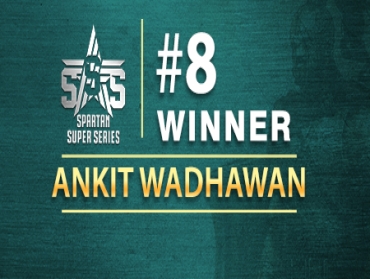 
The weekend grind is always a good one for online poker players with plenty of value being offered in various tournaments and tournament series taking place. For some players though it gets even better as they rack up some terrific consistent finishes in a short span of time. Last night’s early evening tournament of the Spartan Super Series (SSS) at The Spartan Poker took place at 6:00 pm and it was Ankit Wadhawan a.k.a ‘d00mtr00p3r’ who put on another rock solid performance to claim his first SSS title of this series by winning Event #8.

135 players got together to play this INR 1,650 buy-in Re-entry tournament which had a guarantee of 3.5 Lakhs that got bumped up to INR 4.05 Lakhs by the end of registration. A min-cash of INR 6,480 was assured if you were one of the 18 players who would cash out. We saw players like ‘Romoid’, ‘spectre’, SSS Mega Freeze winner ‘omgrachelgreen’ and ‘stupefy’ make it to the money but busting outside the final table. 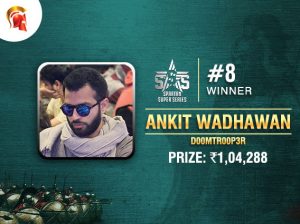 The FT did feature a couple of known names like Shravan ‘D.Trump04’ Chhabria (6th) and last night’s SSS Event #5 winner Parminder ‘Bounceez’ Randhava but they too fell short of the title. After the elimination of ‘alpha321’ in 3rd place courtesy ‘indianpro’, the latter went into heads-up against d00mtr00p3r.

d00mtr00p3r had a bit of a fight on his hands seeing as he was 2:1 underdog stack-wise to indianpro. He kept chipping away at indianpro’s stack to try and bridge the gap. The big switch in stacks happened in a high card hand where indianpro (Td Kh) tried to dominate d00mtr00p3r by moving all-in in a hand. However an Ace is a strong card in heads-up and d00mtr00p3r decided to make a stand with his 2c Ac.

It was just this past weekend that Wadhawan won Saturday’s mini version of the daily featured tournament on Spartan called the DareDevil (Lite) and he also took down the Mega Freeze tournament less than a month ago. Couple these with his 4 runner-up finishes at the India Online Poker Championship (IOPC) last month and you can see how good a form this player is in at the moment. That said, Wadhawan will have his eye on the leaderboard of the SSS where the topper gets a sweet INR 4 Lakhs from the 10 Lakhs on offer.

We will bring you that update right here on GutshotMagazine.com so stay tuned for more!