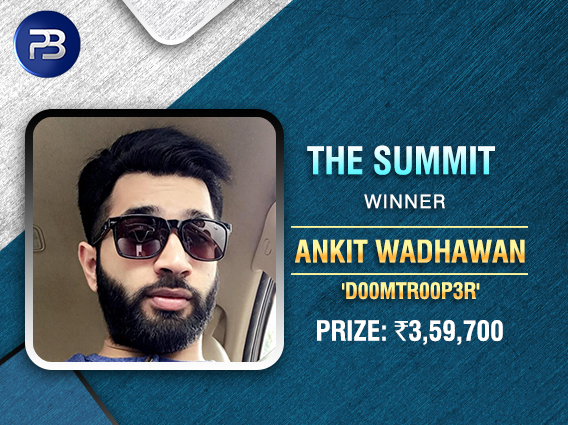 
PokerBaazi has a reputation of holding some of the highest-stakes tournaments in the Indian online poker scene. Along with hosting their enormous INR 1 Crore GTD MoneyMaker tournament, they also host daily feature tournaments having massive guarantees.

Their Thursday’s feature tournament, The Summit MonsterStack Turbo 10 LAC GTD, or simply called ‘The Summit’ is hugely popular among the poker masses of this country. The 10 Lakhs guarantee was surpassed yesterday when a total of 218 entries (101 re-entries) individually coughed up INR 8,250 to create an enormous INR 16.35 Lakhs in guaranteed prize money.

The tournament started on PokerBaazi at 8 pm in the evening and was in the books by 2:57 am today morning. Top 20 places were paid out (min cash – INR 24,525) of the prize pool and the winner to emerge from the 7-hour grind was a well-known player Ankit Wadhawan aka ‘d00mtr00p3r’. Wadhawan took home INR 3,59,700 as 1st place cash prize, a good 22% of the prize pool. He beat the player ‘bellarybabu’ in heads-up for the title. The runner-up took home INR 2,69,775 as his cash prize, another sizeable 16% of the prize pool.

Wadhawan is a regular in online circuits, ranking in the money very often. He also has a Spartan Super Series (SSS) title to his name, when he won a tournament in August this year. Another one of his wins on Spartan was the Mega Freeze in July. He is a poker aficionado and has a couple of recorded live cash outs in Goa as well. This Summit win is a big addition to his winnings and he is now winter-ready with his cozy bankroll enabling him to play in more future tournaments. He’ll be hoping to carry this trend forward to the next year as well.

Keep reading GutshotMagazine.com for more tournament updates, promotions and general poker news from around the world.