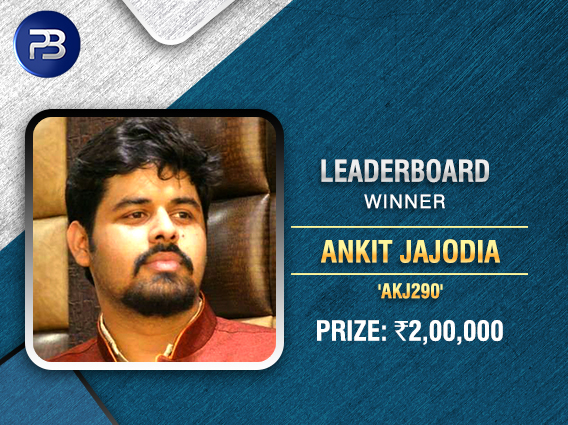 
It seems to have been a brilliant month in online poker for Ankit Jajodia, especially on the PokerBaazi platform. Gutshot has contacted Jajodia a couple of times last month to know about some big wins he had in October, starting from the PokerBaazi Premier League (PPL) that began on 15 October.

Apart from several other cashes, his biggest victory in the PPL was shipping the BSS SuperStack tournament on the final day. A few days later, he was victorious on Sunday again, shipping the BSS MegaStack on this occasion. This consistency is what PokerBaazi loves to reward.

Jajodia had a fantastic month of October and his stats show that, including participating in a total of 120 qualifying tournaments out of which he cashed in 38 tournaments (highest) during the month. Not just that, he also shipped 7 tournaments (highest) in the month, putting him way above the rest on the leaderboard standings and winning himself a prize of INR 2,00,000.

Gutshot caught up with Jajodia after he topped this monthly leaderboard on PokerBaazi. He said, “It has been a tough grind for the past month, but now that I look back at it, I am all smiles. The PokerBaazi platform is undoubtedly the best thing to happen to the poker industry and personally, the pillar of my success. Winning the leaderboard was a big summit on its own. Being able to achieve this was easily one of the highlights of my poker journey.”

We asked him about his plans in the game as well, to which he said, “Now I feel confident and I’m looking forward to the upcoming WPT India series in Goa. All in all, still a long way to go.” Keep reading GutshotMagazine.com for more updates on the top Indian poker promotions.