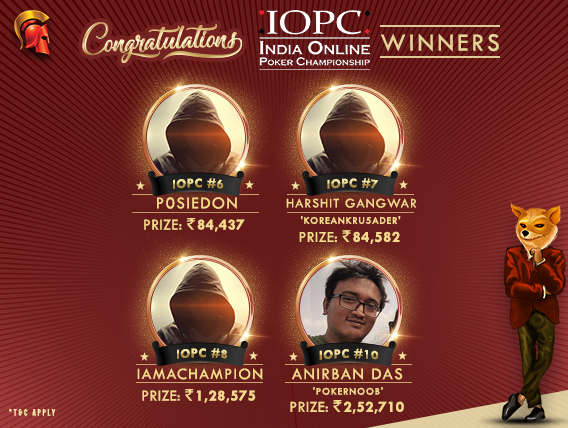 
Day 2 of the prestigious India Online Poker Championship (IOPC) was in the books on Saturday. The series has a total guarantee of INR 8.5+ Crores, something that’s so rare in the history of online poker in India. The Spartan Poker is currently hosting the series on its platform and every event so far has crushed the guarantee, showing how popular the series is.

Saturday’s feature tournament on Spartan is DareDevil but under the IOPC umbrella, the tournament got an upgrade in its guaranteed amount to INR 15 Lakhs, which was won by Akash Gupta. Along with that, there were four other events hosted on the day, as follows.

The first event for the day was INR 4 Lakhs GTD NLH event and had 488 entries signing up for it, paying INR 550 each as the buy-in. The prize pool exceeded the guaranteed amount to INR 4,66,500. The top 72 places were paid out of which the winner emerged to be Sanjay Kandampully aka  ‘P0seidon’ who took home INR 84,437 out of the prize pool. He beat a regular on the online circuit, ‘omgwonderwoman’ to secure the victory and the 1st place cash prize.

The last hand of the event saw Kandampully going all-in pre-flop with 7d Js, having a massive lead, and receiving a call by his opponent, who had Kd Td, decent hole cards. The board came to Qh Qs 4h 3h Jd and Kandampully hit Jacks on the river to complete two pairs, beating omgwonderwoman’s Queens on the board.

The second event in the line-up was another INR 4 Lakhs GTD NLHE but with a buy-in of INR 660. The 385 entries each chipped in the buy-in to create a prize pool of INR 4,57,200, again exceeding the guarantee. The top 54 places were paid in this tournament. The champion emerged was ‘KoreanKru5ader’ taking home a wholesome INR 84,582 as 1st place cash prize. He beat ‘bluffer’ in heads-up to bag the title.

The runner-up won INR 61,036 for his finish. The last hand was played at Level 38 with 25K/50K/5K (ante) and was a pre-flop all-in. The eventual champion won with Ace-high, beating bluffer’s King-high hand.

IOPC Day 2’s third event was INR 6 Lakhs GTD NLHE and followed all previous events by breaking the guarantee. The 395 entries all coughed up INR 1,100 buy-in each and the prize pool came to INR 6,95,000. The top 54 places were paid with minimum cash of INR 3,128. As his name suggests, the champion to emerge was ‘Iamachampion’ cashing INR 1,28,575 for his victory. He beat ‘ALBATROSS’ for the title. ALBATROSS also earned a good INR 92,783 as his cash prize.

The final hand of the event also was an all-in pre-flop. Iamachampion made two pairs on the board (Js 3h Ad Jc 2s), with Aces and Jacks beating his opponent’s Jacks and Nines.

The final event of IOPC’s Day 2 was the INR 10 Lakhs GTD NLHE and had a buy-in of INR 2,200. The prize pool came to INR 13,66,000, all created by the 683 entries that signed-up for the event on Spartan. Well-known player Anirban Das aka ‘pokernoob’ shipped this event for INR 2,52,710, after beating another regular Amit Ajwani aka ‘kasuf’.

Das is such an experienced player that his previous online record looks like a shipping yard studded with plenty of titles and a few leaderboard wins in the mix too. His recent significant win was on Spartan when he shipped Friday’s feature tournament The Elite for upwards of INR 5.5 Lakhs.

The last hand of the day saw Das raising to 105,000 pre-flop with Pocket Eights. The flop Qh 8s 6h was of much help to him as he completed his set and he played it cool, checking. The As turn card saw Das betting 221,250 and he was matched by his opponent. The river Tc made a pair for Ajwani, who shoved but it was no good against the flopped set, subsequently losing to Das and earning INR 1,82,361 for his runner-up finish.

The INR 8.5+ Crores GTD IOPC will run till 20th January and plenty of exciting events are yet to be hosted, so stay tuned to GutshotMagazine.com for first IOPC results and updates as well as for general poker news from across the world.

Saturday’s feature tournament on Spartan is DareDevil but under the IOPC umbrella, the tournament got an upgrade in its guaranteed amount to INR 15 Lakhs, which was won by Akash Gupta. Along with that, there were four other events hosted on the day, as follows.