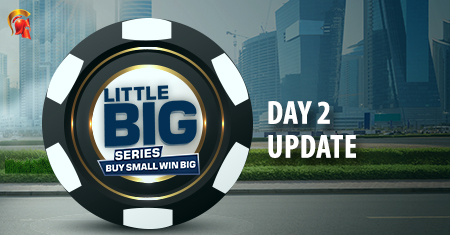 Friday action at the ongoing Little Big Series at The Spartan Poker started the day with Pot Limit Omaha and ended with its edition of the highroller tournament called the Mini Biggie which was won by ‘anilsharma’ for INR 1,49,760. A total of four tournaments took place over the course of the day and here we’ll take a look at all the results of Day 2’s events.
Little Big Series #5 (20K GTD) (RE)
As mentioned this PLO event was the kickoff event of the day featuring a buy-in of INR 55 and a guarantee of INR 20,000 which got overtaken comfortably when 220 entries took the prizepool upto INR 27,750. ‘Basket’ and ‘anvinallen’ ended up battling each other in heads-up and the former took down the title for a score of INR 5,869 which runnerup anvinallen took home INR 3,951.
Little Big Series #6 (45K GTD) (PKO)
Up next was the Progressive Knockout tournament with a buy-in of INR 440 and a guarantee of INR 45,000. The eventual prizepool became INR 61,500 as a result of 2015 entries in the tournament. ‘Lazyman’ was the winner in the tournament outlasting ‘Leokarma2609’ for the first place prize of INR 13,622 while the latter received INR 9,194 for his efforts.
Little Big Series #7 (40K GTD) (FO)
The only freezeout tourney of the day took place in the early evening hours and saw 235 entries pool together a buy-in of 220 to form the eventual prizepool of INR 47,000. ‘sanju dalal’ was the victor in this instance outlasting the 200 plus entries and ‘AlwaysSmile’ in headsup battle to win INR 9,940 for first place. AlwaysSmile got INR 6,692 for his efforts.
Little Big Series #8 (600K GTD) (6 Max) (RE)
A lot of aniticipation for the last event of the day as this was the biggest buy-in event of the series so it also attracted a wider range of players to participate given that a juicy INR 6 Lakhs was up for grabs. That guarantee was crossed once again and players were battling for a share of the final INR 6.47 Lakhs prizepool. ‘anilsharma’ triumphed in this 6-max event beating ‘Dark fish’ in headsup for a payday of INR 1,49,760 while the latter got INR 1,01,712 for second place finish.
Still a couple of days left in the Little Big Series at The Spartan Poker which has players also vying for leaderboard points which can help the top 5 finishers earn a share of INR 1 Lakh including INR 50,000 up top along with free tickets to Spartan’s signature tournaments the Millionaire and the Two of a Kind (2.o.K). Stay tuned to GutshotMagazine.com for more updates!