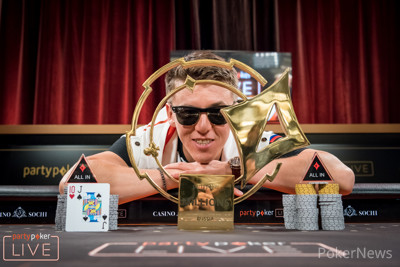 
The partypoker LIVE MILLIONS Russia tournament series has finally come to an end at the Casino Sochi yesterday, after the conclusion of the Main Event. The final 11 players walked out yesterday to play on Day 5 and a few hours later, one of them lifted the coveted trophy.

Yesterday, we reported the news of Andrey Malyshev leading the final 11 players with a chip stack of around 140 million. There were a couple of other known players in the mix and one of them was partypoker ambassador, Anatoly Filatov, being one of the mid stacks during the start of play on Day 5.

He had around 65 million in chips and did brilliantly to chip up and ultimately lift the trophy, recording his highest live poker cash by a long way. There were 9 Russians among the final 11 and Filatov reached heads-up against countryman Gor Kazaryan, where he beat him and took home a massive prize of RUB 60 million (~$886,200).

It was a late present for Filatov, whose birthday was just a couple of days back. “Very tired, very exhausted, I don’t realize yet that I won this tournament, especially in my home country. On the eighth of August it was my birthday, 30 years old, such a good beginning for this year. I am very glad,” he said after completing the victory.

He is now slightly short of the $3 million mark in live poker cashes, with deep runs in other partypoker events in North America, Barcelona and even at the Caribbean Poker Party. In the final hand, his J 10 hit a straight on the board, beating Kazaryan’s two pairs.

Keep reading GutshotMagazine.com for similar updates on major poker tournaments from across the world.