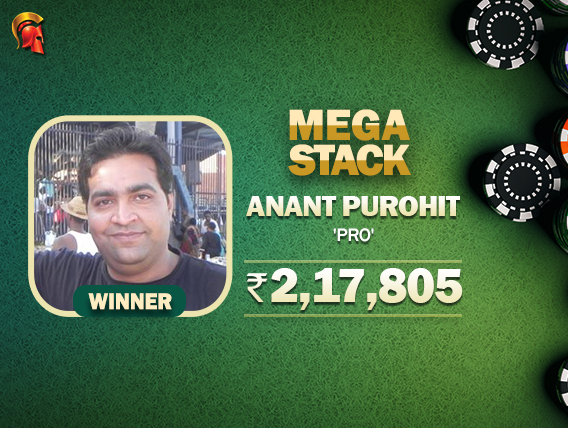 
Anant Purohit is one of those players who has been around the live and online poker circuit since a while now and when he plays on The Spartan Poker under the name ‘Pro’, you’re always going to find him in the money of big tournaments, if not making deeper runs.

Yesterday too, he took part in the Mega Stack INR 12 lakh GTD tournament, which is a Spartan featured tournament that takes place on every Tuesday night. The tournament which began at 7:30pm ended at 1:40am this morning and after a 6-hour 10-minute grind, it turned out to be a very Happy Diwali for Purohit.

The tournament has a buy-in of INR 3,300 and yesterday, a total of 236 entries made their way into the tournament, with the top 31 places eventually getting paid out a minimum cash prize of INR 10,560. These guys would’ve received a minimum of 3x their investment and would all have been happy, but none more than Purohit.

He entered heads-up with ‘alienrobot’ and after some deliberation, the two players agreed on a heads-up deal, as there wasn’t much of a difference in the two chip stacks. However, Purohit was ahead in chips and was deemed winner last night, taking away the top prize of INR 2,17,805. alienrobot would’ve been pretty happy too, collecting INR 2,06,874 for finishing second.

In the final hand, Pro collected another pot of 450k and that’s when the decision of the deal happened, when the tournament was in Level #56 and the blinds were at 27,500/55,000 – 5,500. Another known player making a deep run on the night was Rajat Sharma aka ‘Garammasala’ who finished 6th.

Gutshot caught up with Purohit after this victory and he said, “Mega Stack is one of my favourite tourneys with an awesome structure and I was quite confident from the start of the game. Keeping up with the pace, I was collecting pots from time to time and without much effort, I was able to reach FT with a good stack where there were a few good players including Garammasala and alienrobot. I was lucky to win a flip against one of the best players on the table. And then it wasn’t a big deal to sail to HU where I made a deal happily.”