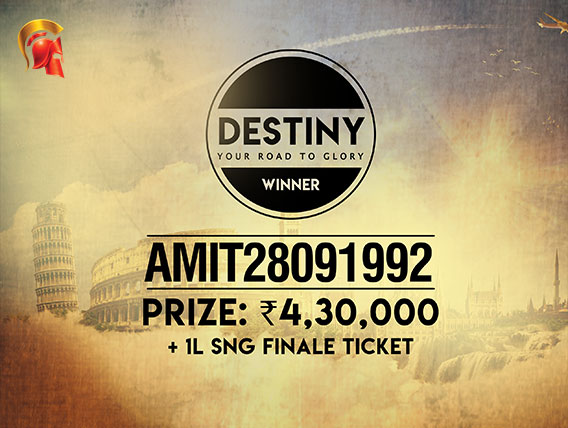 
Every day of the week, you can find high guarantee featured contests on The Spartan Poker, which is a leading poker company in India. One of the most popular of these featured tournaments is the Destiny tournament series, which takes places every Wednesday and gives one player the chance to win a free package trip to play poker in Europe!

Over the course of 10 weeks, one player will win the Destiny tournament each Wednesday and these winners also win an INR 1 lakh seat into the Destiny SnG Finale which will be deducted from their winnings. The winner of this Destiny Finale will walk away with the thrilling Europe package trip.

So far, five tournaments of Destiny 5.0 have been completed, with the fifth winner being crowned in the early hours of today morning. The INR 20 lakh GTD tournament began at 7:30 pm IST and was over nearly 10 hours later, with ‘amit28091992’ shipping the tournament and taking home the prize of INR 5,30,000, which includes an INR 1 lakh buy-in to the Destiny SnG Finale.

It was a well-fought tournament between 392 entries that registered to this high-value INR 5,500 buy-in tournament. The top 30 players were paid out a minimum cash prize of INR 14,000 and quite a few regular online pros were a part of the final table. Kunal Bhatia aka ‘Alex 52’ shipped the Sunday SuperStack last Sunday and he finished in 4th place here, for INR 1,40,000. ‘Soona Paana’ made a good run in the recent Two of a Kind tournament and he finished 5th here, for INR 1,10,000 as well.

Tonight’s featured tournament on The Spartan Poker is The Flash, which is an INR 11 lakh GTD tournament. Keep reading GutshotMagazine.com for a daily update on major online and live poker tournaments in India and around the world.