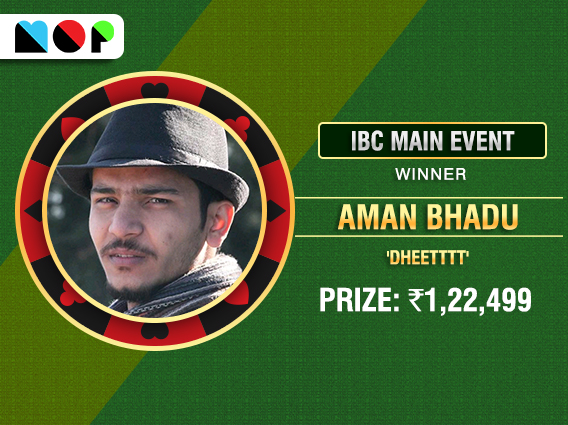 
Just a few days ago, the Indian poker platform MadOverPoker announced a unique series called the Indian Bounty Championship (IBC), to be held between 7-9 Dec. The 3-day affair featured only bounty events, where there’s a bounty amount on each player’s head and as they knock out players, they get half of the eliminated player’s bounty and the other half gets added to their head.

The series had a total of 8 events lined up suiting all types of players. There was also a Leaderboard held for the duration of the series, with first player being awarded a cash prize of INR 50K, followed by the next eight being paid out. The combined guaranteed prize pool was declared to be INR 15 lakhs.

The first day of the event had three events, which started off with the INR 825 buy-in event called IBC #1. The guaranteed prize pool for it was INR 75K. Other two events for the day were the 50K GTD event and the 100K GTD event.

The winners on the first day were –

The winners of the second day events were –

The winner to emerge from the Main Event after 6 hours of action-packed grind was Aman Bhadu aka ‘Dheetttt’, who took home INR 1,22,499 as 1st place cash prize, including the INR 59,437 for the knock-outs he delivered along the way. The runners-up, Sunil Arora aka ‘bababk’ cashed out INR 1,111,389. He also won the IBC #3 event, as mentioned above. Another IBC winner, Vitsituo Mepfhuo aka ‘Phantom’ also finished in the money, cashing out at 31st along with shipping the IBC #4.

Gutshot got in touch with Bhadu after his win, and he had this to say about the gameplay leading up to his win, “The players were super tight in the final stages. I was on a short stack and took advantage of the situation.  When I had a solid stack, I began bluffing and it worked pretty well for me both the times.”

Talking about the format, he added, “I love the concept of Bounties – high value and good returns. Thank you MadOverPoker for a wonderful Bounty Championship.”

Don’t have an account on MadOverPoker? If you wish to play in the Indian Bounty Championship and win big in MadOverPoker promotions, sign-up now by clicking HERE.