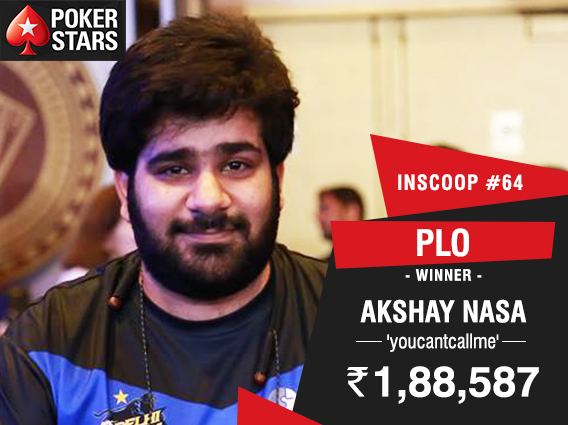 
Spartan Poker, PokerBaazi, Adda52, 9Stacks, PokerStars India. Name it and Akshay Nasa has won a title on all of the major Indian online poker platforms. And when he wins, he decides to win the major tournaments. Last night too, he added another title to his collection, winning an INSCOOP title on PokerStars India.

The Pot Limit Omaha (PLO) format is becoming more and more popular among Indian players in recent times and yesterday, PokerStars hosted INSCOOP #64: PLO INR 10 Lakh GTD, with each entry paying the buy-in of INR 4,400. The total field emerging last night was 182 entries and the top 34 players from them were paid out, each receiving a minimum cash prize of INR 9,134.

Among the known players who ended with a pay-check last night were Kartik Ved aka ‘TheInternetKid’ (32nd), Sam Anand aka ‘TheRealLokimon’ (29th), Neeraj Kumar aka ‘SelfClaimedPro’ (16th), Siddhanth Kapoor aka ‘bullzeyepower’ (15th), Arjanveer Chadha aka ‘ballistik310’ (10th), and others.

The FT would’ve not been the toughest one Nasa has faced in his life as there were not a lot of regulars in contention. However, he would’ve been delighted with this win regardless. Players will return to PokerStars India tonight for the 12th of 15 starting flights of the INSCOOP Mammoth, which is the mega Main Event of the series.

Keep coming back to GutshotMagazine.com for all updates from the series as well as other tournaments from across India and around the world.